The deputations raised many demands with the Chief Minister and sought their redressal.

A deputation of people from Banihal thanked the Chief Minister for undertaking many developmental works in the constituency. They demanded formulation of a developmental and beautification plan for the town, upgradation of various schools at Pogal, Chamalwas and Maligam and construction of Kawa-Buzla and Shaalgali roads. They also demanded bringing areas of Maho Mangat, Neel and Gool into the tourist map of the State, development of playfield in the town and at Khari and strengthening of power infrastructure in the area.

A deputation of people from R S Pura sought realignment of various administrative units in the area, repairs of Dublair-Miraan Sahib road and strengthening of local health centre.

A deputation of members of Teli community from Udhampur demanded development of a local park, upgradation of a local schools and taking steps for the betterment and welfare of the community.

Some women’s deputations demanded introduction of more welfare schemes for them. A women’s deputation from Jammu city sought construction of road from Karan Bagh to the shrine of Hazrat Baba Budan Ali Shah(R.A.) and raising of embankments on the nallah near Jammu airport.

A deputation of people from Dachan in Kishtwar district sought establishment of an ITI, degree college and upgradation of a local PHC. They also demanded inclusion of the area into the local tourist circuit.

The deputation thanked the Chief Minister for starting work at Dak Bungalow, Sunder and desilting work at the local Zamindari khul. They demanded rehabilitation of affected families of PukulDul project.

A deputation of KMD Association sought release of balance payment of compensation and flood relief in their favour and route classification between buses and Sumo vehicles in the Kashmir Valley.

The Chief Minister listened to the demands of the deputations and assured them to look into the same at the earliest. 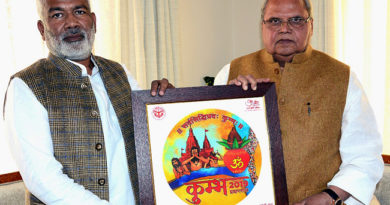