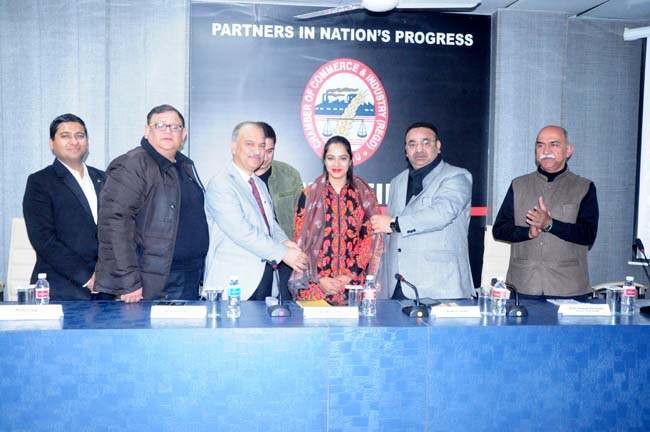 Dr. Vaneet Kaur, the daughter of soil who has made it big in the United States of America in the springtime of life was duly honored in an extravagant ceremony organized by the Chamber of Commerce & Industries, Jammu. The bluestocking who is making Jammu proud by working as a distinguished expert of her field in the capacity of Visiting Professor in one of the top universities of USA had made headlines in the previous year too by completing her degree of Doctor of Philosophy at the age of mere 27 years, taking barely two years.

In the event organized under the aegis of the President, Mr. Rakesh Gupta, Dr. Vaneet Kaur was felicitated by the Vice Chancellor of University of Jammu, Prof. Manoj K Dhar for all her stellar achievements at such a young age. The recognition from the sachem of the alma mater of Dr. Vaneet Kaur was quintessential as she has been a gold medalist, silver medalist and a former faculty member of University of Jammu.

Speaking on the occasion, Dr. Vaneet Kaur expressed her deepest gratitude towards the Chamber for honoring her and dedicated her triumphant journey to her parents Mr. Sewinder Singh Parwanda and Mrs. Satnam Kaur. She reminisced about how under the correct guidance and with full family support, she embarked on the journey of success and kept moving towards the zenith. She highly exhorted all the youngsters to believe in themselves and follow their dreams.

The representatives of Chamber reiterated her feats to the students and women who had shown up in huge numbers to listen to the odyssey of the grandee. Dr. Kaur was a brightly shining star right from her schooling days. She was chosen as the first non-catholic National Executive Committee member of a social movement called Young Christian Students/Young Students Movement (YCS/YSM) and she represented India at the age of 14 in Nepal and in European countries at the age of 15.

The leader in her grew with her and in her college days she led her college as the president of GCW, Parade. Along with her leadership abilities, she was always an ace student. After graduating with a silver medal, Dr. Kaur topped not only in her MBA department but whole of the Faculty of Business Administration of University of Jammu in the 2011-2013 batch and so was awarded the university gold medal by the then honorable President of India, Shri Pranab Mukherjee.

After clearing UGC-NET twice, Dr. Kaur went on pursue her Ph.D. from University of Jammu. Based on her merit as well as research proposal, the highbrow had been awarded Fellowship for her PhD research work by Government of India for a duration of five years. Nonetheless, the polymath completed her Ph.D. in a record time of two years and relinquished her scholarship for others in need.

Her PhD was not even over and she started working as a Lecturer in University of Jammu at an early age. Not so long after she was selected as a Visiting Professor in University of Texas at Dallas at the age of 28 and at this prime of her age she has embarked on a journey to share her knowledge with global students and mentor them all along the way. She is also directing her passion towards research by already writing a book for a top notch publisher in USA at just the beginning of her academic career.

At a young age Dr. Vaneet has achieved which many just dream of and is determined to achieve much more in the near future. Chamber of Commerce has highlighted the journey of this star who hailed from a small town but is blazing across the globe so that it can serve as an inspiration for the youth of Jammu & Kashmir to emulate. 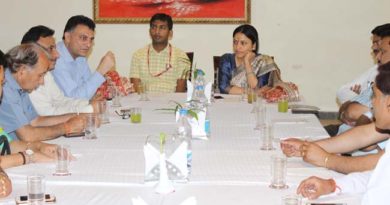 Katra to be the cleanest & well developed city: Chauhan 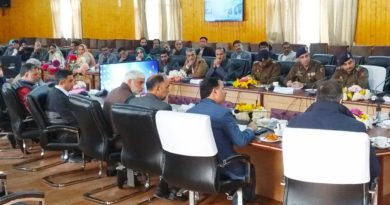