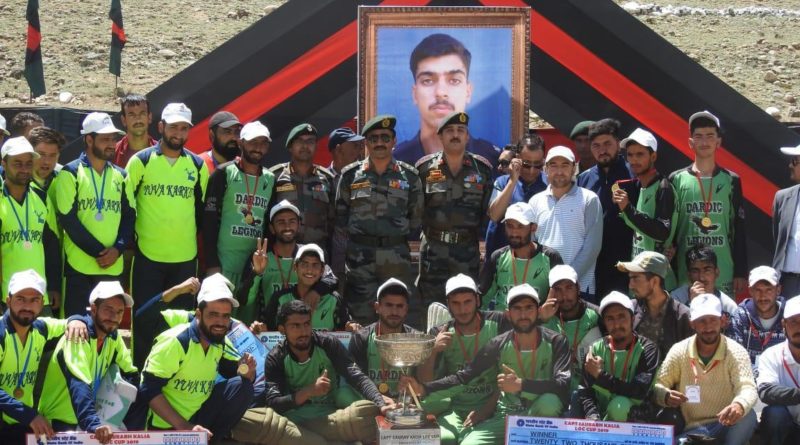 Cricket is one of the most popular sports in Ladakh & Kargil region. A cricket stadium is named after Capt Saurabh Kalia, who laid down his life in service of the motherland on 15 May 1999, at the onset of Op Vijay , at Kaksar . ‘Capt Saurabh Kalia LOC Cup’ is played every year to pay homage to the supreme sacrifice made by him in the line of duty to the nation.

​This year, as a build up towards the commemoration of 20 Years of Kargil Vijay Diwas, the 16th edition of the LOC Cricket Tournament was conducted at the Capt Saurabh Kalia Cricket Stadium. A total of 32 teams from various villages of Kargil region took part in the event with great enthusiasm.

​The exciting and hard fought final was played between DLS Shimsa and Yuva Karkit in presence of Senior Military and Civil dignitaries. DLS Shimsa team emerged as the winner of the coveted Cricket Tournament. The winner, runners up and best performers of the tournament were felicitated with Rolling Trophy and cash awards by Maj Gen Sanjeev Dogra, GOC, ‘Forever in Operations’ Division and Commander Kargil Sentinels Brigade. General Dogra encouraged everyone present to keep up their enthusiasm towards sports, as also continue to live by their rich heritage and culture. The Chief Guest brought out that the Indian Army has always encouraged participation and development of local youth in every field, including sports, and will continue to do so.

​Such initiatives by the Army in the Kargil Region have greatly contributed towards fostering & strengthening bonds with the local populace, who have always taken pride in the fact that they have stood side by side with the Army in every war, including during Operation Vijay.