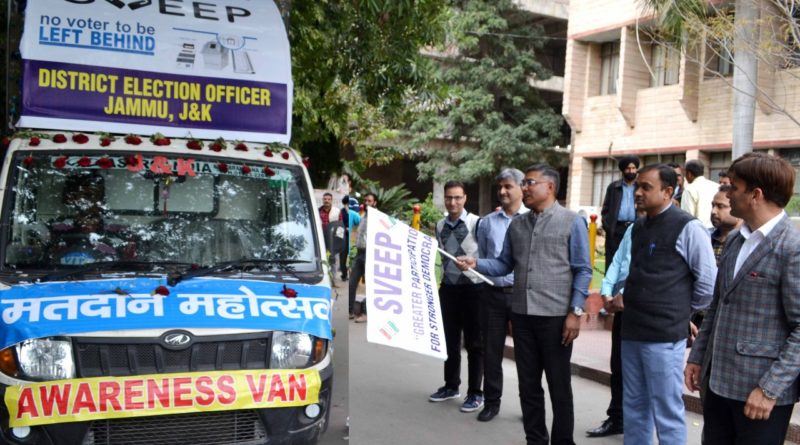 Chief Electoral Officer J&K, Shailendra Kumar today flagged off Matdan Mahotsav van to spread mass awareness about importance of exercising vote across Jammu district ahead of General Elections-2019.
District Election Officer Jammu, Ramesh Kumar and Other officers were also present at the launch of mobile campaign aimed at to generate awareness among the masses regarding the importance of vote and motivating them to participate in large numbers in the upcoming parliamentary elections.
The launch of Matdan Mahotsav Van forms part of Systematic Voters’ Education And Electoral Participation (SVEEP) campaign launched by district Election Authority Jammu. From today onwards, till April 10 the mobile van will go around different parts of Jammu district and disseminate awareness regarding the voters’ rights.
Matdan Mahotsav Van will spread awareness regarding the Electronic Voting machines (EVMs), Voter verifiable paper audit trail (VVPAT)- stationed inside the van along with the instructors for display and providing hands on training to public at different places in Jammu district. The van will also display videos regarding EVMs and VVPAT and method to cast vote.
The DEO Jammu informed that a large number of activities under the SVEEP campaign has been undertaken in the district which includes awareness through Flexes, hoardings, wall paintings, Graffiti, Slogan writing, poster making, Rangoli, awareness rallies in the govt. and private educational institutions.
Awareness under SVEEP will also be undertaken by organising culture programmes including drum beating and Dogri Folks, Kite Festival, Holi Mahotsav and sensitizing the women sarpanchs and Panchs to increase women participation.
Kumar further informed that the awareness will also be carried out through Cinema ads and media strips, carry bag campaign at business establishments in Jammu, awareness through police public mela and media campaign through electronic and print media.
Meanwhile, it was informed that to encourage voters participation in the upcoming parliamentary elections, SVEEP campaign has already been launched under the supervision of ACD Jammu.
The charter of activities further undertaken includes activities like ”Unveiling elections” a public outreach initiative, Slogan writing competition, interaction with the devotees at different religious places, sensitization of block ASHA coordinators and Aganwadi workers about electoral process and practices, ”walk the talk” with morning and evening walkers, vote-a-thon of PWD voters, Rangoli competition on the theme “Chunao Mahotsav” and holding Awareness rallies in and around colleges. 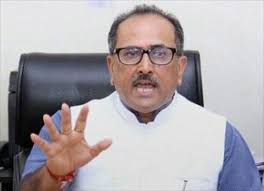 Coronavirus: J-K police use drones to announce restriction on movement of people 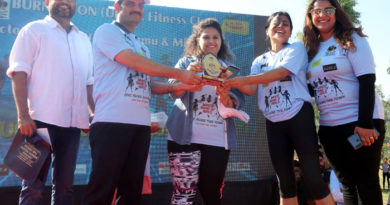