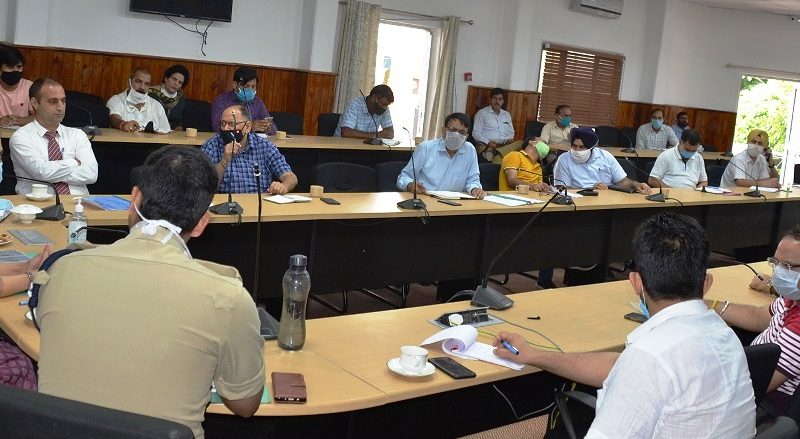 To review the arrangements for smooth conduct of Shri Amar Nath Ji Yatra 2020, a meeting of the all district heads was held under the chairmanship of Deputy Commissioner Jammu, Sushma Chauhan in which the arrangements for this year Shri Amarnath Ji Yatra were discussed in detail and finalized.
Deputy Commissioner held detailed discussions with heads of the various security agencies and district officers of the line departments for hassle free and smooth conduct of Shri Amarnath Ji Yatra 2020.
During the meeting, the required facilities for yatries at Yatri Niwas at Bhagwati Nagar and lodgement centres to be established for yatries viz a viz arrangements and facilities for COVID-I9 sample testing as also the general health check up of yatries was discussed in detail with the officers of Health Department.
The arrangements for registration of yatries at Yatri Niwas was also discussed in the meeting. The facilitation of Yatries and their COVID-19 sample testing at Jammu Airport and Railway Station, Jammu also came under discussion during the meeting.
The Yatra Route was also discussed by Deputy Commissioner with SSP Jammu, SSP, Security, Jammu and other allied central and local security agencies. Similarly, repair, face lifting and requirement of other facilities viz accommodation, power and water supply inside Yatri Niwas at Bhagwati Nagar, the base camp of Shri Amarnath Ji Yatra as also at different lodgement centres was also discussed by the Deputy Commissioner with the Engineers of PWD (R&B), PILE, PDD and Tourism Department.
During the meeting, the Transport arrangements for ferrying yatries from lodgement centres to Yatri Niwas Bhagwati Nagar was also discussed with RTO, Jammu and officers of the State Road Transport Corporation. The deployment of the teams of Health Department for COVID-I9 Sample testing near the lodgement centres and also teams for general health check up of Yatries near the centres as per the past practice was also finalised. The deployment of Police and other security forces viz a viz Magistrates at Yatries Niwas and around lodgement centres as also the yatra route was also finalized for security and hassle free movement of Yatries. The cleanliness, sanitation and hygiene facilities at Yatri Niwas at Bhagwati Nagar and around lodgement centres was also discussed with the Municipal Commissioner, Jammu who assured that needful will be done as per the past practice. The chair directed all the officers present in the meeting to ensure that all necessary arrangements for smooth conduct of Yatra to be carried out by their respective department are put in place well in time before the commencement of Yatra.
The meeting was attended by Commissioner, Jammu Municipal Corporation, Avny Lavasa, SSP, Jammu, Shridhar Patel, Swaran Singh Kotwal, SSP Security, Jammu, ADC (L&O), Jammu, ADC (Adm), Jammu, Addl. SP CID, Jammu, Addl. SP Traffic, Jammu, Commandant CRPF, RTO, Jammu, CMO, Jammu, Joint Director Tourism, Jammu and officers of Information, Youth Service & Sports, Civil Defence, Super Bazar, Jammu and HQ 26 INF Division.

Kishtwar: Religious institutions roped in to educate people about COVID-19