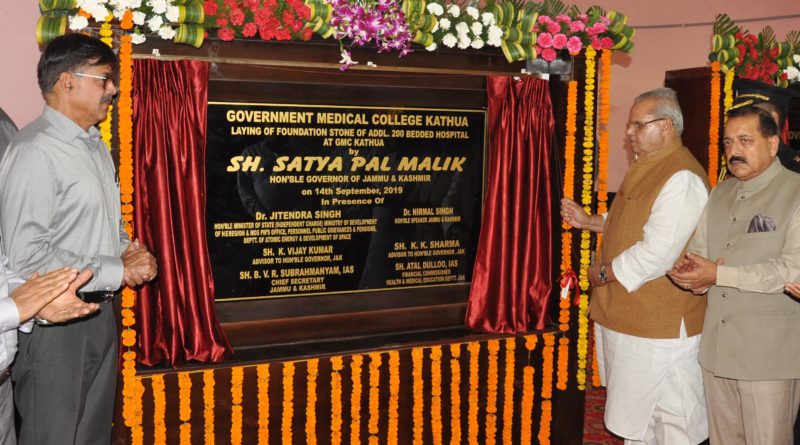 Governor Satya Pal Malik inaugurated the Govt. Medical College, Kathua, and laid foundation stone for additional 200 bedded Hospital for the GMC Kathua today. He reiterated the Government’s commitment of providing a better and affordable healthcare system in J&K and observed that every possible effort is being made to strengthen the healthcare institutions in every nook and corner of the state.

Governor on the occasion observed that the Health and Medical Education has shown remarkable improvement in last one year with visible changes in medical education sector. He said that the Central Govt. has sanctioned 8 medical colleges in J&K in the last one year and each new medical college has got budgetary support of Rs. 189 Crore. He noted that the Department of Health and Medical Education has successfully operationalized five Govt. Medical Colleges at Anantnag, Baramulla, Kathua, Rajouri and Doda with supplementation of infrastructure, manpower and state of art machinery and equipments in Govt. Medical Colleges and Associated Hospitals.

Governor stated that the Medical Council of India after inspection of these five medical colleges have issued Letter of Permission (LoP) to four medical colleges for starting MBBS classes in the current academic year,  starting from 1 August, 2019 with intake capacity of 100 students each and GMC Doda will get the permission in the next academic year.

Governor mentioned that out of the 3,375 sanctioned posts of Gazetted and Non-Gazetted posts, more than 250 faculty members, 400 resident doctors & 500 nurses and Paramedics have joined the new GMCs and the others are in the process of recruitment through the recruiting agencies.

Governor stated that other than the medical colleges, Shahpur Kandi project – a collaboration of J&K and Punjab Govt. along with Ujh Multipurpose project will prove to be very useful not only for farmers but also for residents of Kathua and Samba as it will provide water for irrigation and drinking purposes.

Dr. Jitendra Singh, MoS PMO, expressed his gratitude to the Central Govt. for sanctioning a Medical College to Kathua. He said that Kathua is fast becoming an Education hub with establishment of an Engineering College, University Campus and a Kendriya Vidayalaya.

Dr. Singh said that it was dream of former Union Finance Minister, Arun Jaitley that area between Kathua and Vijaypur should be developed as an Education hub and it seems to become reality now. He also said that Udhampur Doda is the only constituency where 3 medical colleges were sanctioned by the Modi Govt.He said that after abrogating Article 370, faculty members from outside the State would also come to teach in the newly established colleges.

Dr. Nirmal Singh, Speaker, J&K Legislative Assembly, said that health care services could only be considered best if there exists robust health care infrastructure in the remote areas. He exhorted doctors to serve in remote areas as there is dearth of doctors in far off places. He also congratulated the newly enrolled students who are studying in the GMC Kathua.

Sh. K Vijay Kumar, Advisor to Governor, said that with the establishment of GMC Kathua, people of Kathua, Pathankot, Himachal and nearby areas will get good health care. He said that at present the bed strength of the Associated Hospital (District Hospital) of GMC , Kathua is 300 and as per MCI guidelines, there is requirement of 500 bedded hospital by 4th year of MBBS. The present 300 bedded Hospital is being upgraded to 500 beds.He said that the new Hospital, the foundation stone of which is being laid down, shall also accommodate Emergency block, Diagnostic centre, operation theaters, ICU, Rooms for faculty members, besides having 200 additional beds for the patients.

Sh. K K Sharma, Advisor, complimented the people and the first batch of medical students who have started their course in GMC Kathua. He urged the executing agency for timely completion of 200 bedded hospital as funds for the same will be released on time.

The College Magazine of GMC Kathua, ‘ASPIRE’ was also released on this occasion. 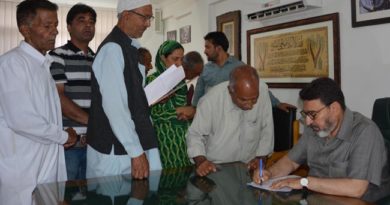 Crimes against women on rise in J&K