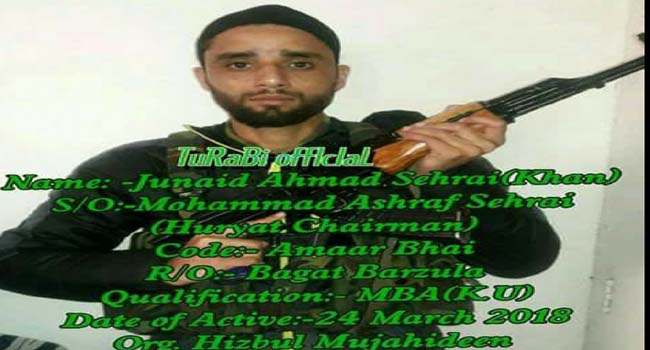 The youngest son of Mohammad Ashraf Sehrai, who was recently nominated as the interim chairman of Tehreek-e-Hurriyat, has joined militant ranks.

The confirmation came on Saturday afternoon when his picture holding a Kalashnikov rifle appeared on social media. The posting of pictures has become an attestation of young recruits joining militants.

A police official said Khan was missing from home for past few days and the family had lodged a missing report at a local police station.

Earlier this year, PhD scholar Manaan Wani, who is also a resident of Tekipora, had joined militant ranks.

It is for the first time that the son of a senior separatist leader has joined militant ranks.

Khan’s joining militant ranks has come within days of his father’s nomination as the interim chairman of Tehreek-e-Hurriyat, the party founded by Syed Ali Geelani.