A 24-year-old man was arrested for beating his father to death for a gold chain and dumping his body in a canal here last month, a senior police officer said on Sunday.

Jammu’s Superintendent of Police (Headquarters) Farooq Qaiser said the body of Chak-Bana village resident Vijay Kumar, 58, was recovered from the canal at Raipur-Gujran in R S Pura on September 18.

“The body was wrapped in a bed sheet and has been tied with an electric cable from head to toe. The identity of the deceased was established on September 26,” Qaiser told reporters here.

He said it took a special investigation team eight days to solve the blind murder.

“Several suspected persons were rounded up and put to thorough questioning. Police was finally able to zero in on victim’s son Tarun Kumar,” he said.

It transpired in the investigation that the deceased did not have good relations with his son, said the SP.

On the night intervening September 12 and 13, the father-son duo had a fight at their residence over a gold chain belonging to Tarun which had been taken by his father, he said.

Following the arguments, Tarun beat his father to death, and next day put his body in his car and dumped it in a canal at village Dharab-Satwari, said Qaisar.

On Tarun”s disclosures, the police also recovered the battery and the memory card of the mobile phone used by his father along with the vehicle used by him for disposing the body, the SP said.

Tarun had also thrown his father”s mobile phone along with its SIM card in the same canal. 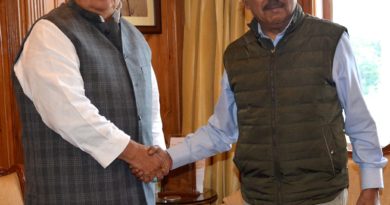