Decades old perpetuation of the  misperception that Kashmir issue needs a resolution without involving other parts of Jammu and Kashmir has clouded many realities  and that has delayed the solution to the crisis and worsened the situation. There is a greater sense of insecurity among the minorities in the state  than anytime before .

Those speaking in terms of addressing the problems faced exclusively meant  for the Valley population upend the scales of social justice and political aspirations of the other regions and religions in the state. There can never be an isolated solution and any attempt to do so would backfire and complicate the problem in Jammu and Kashmir and also make it difficult for Delhi to address it.

It is an agreed fact that with Delhi lies the primary responsibility to address all the internal problems in J&K , but this needs to  be done in a free ad fair manner by taking al stake holders on board.

Hitherto Delhi’s tendency to look all the problem through the Kashmir-centric prism has generated several wrong perceptions and created the problems that now look beyond redemption . Kashmiris are suffering the most because of Delhi’s policy of appeasement of the Kashmir-centric theories. And, the original sinner is Congress that created a situation where the individuals and their family interests  were given priority over the interests of the commoners.

Even if the rigging in the 1987 polls  is taken as original sin in triggering the  alienation and militancy , the question is , why was it done , because the then Prime Minister Rajiv Gandhi was  keen to keep his party in power along with  the regional political grouping National Conference of Farooq Abdullah.

Delhi should have allowed the natural mandate to emerge . It manipulated the outcome . That was one , but how the release of five militants in exchange of then Home Minister Mufti Mohammad Sayeed’s daughter Rubiya Sayeed can be justified . Delhi buckled . It pressurized the state government to release the hardcore militants. More than  the release of the militants, it was the bestowing of sense of victory that the militancy got that upended the whole situation. The first fall out was the minorities were forced to leave the Valley and till date there exist no chances of their return to their homes. Islamic radicalism has grown and Kashmir is fast on its way to become a lawless land.

Congress-ruled Delhi injected  so many weaknesses in the state  that  the minorities were squeezed out . Jammu that hosted Hindus and Muslim migrants from the Valley  is now being ignored and its aspirations are being suppressed by dubbing it as communal . Delhi is an an equal partner in promoting this narrative .

The conspiracy is to isolate Jammu and Ladakh in staking their claim to the things that are due to them as citizens of the state and that of the country. The fault of these regions is that they have stood by the nation  all the time and offered sacrifices . If Jammu and Ladakh are ignored , there can be no solution to any of the problems concerning J&K. Delhi must understand that. 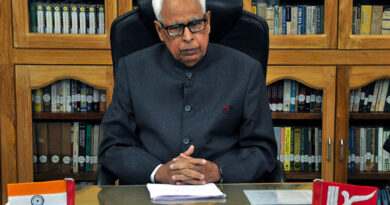