The bias in the fresh or updated report on alleged human rights violations in Kashmir released by the Office of the High Commissioner for Human Rights (OHCHR) against India is too clear and it has all the words and phrases that have become the standard vocabulary of Pakistan in regard to Jammu and Kashmir.

In its conclusions and recommendations for India on Kashmir, it has signed off with a clause that reflects its illiteracy and deliberate distortion of facts. The last recommendation for Delhi made by the report asks India to “fully respect the right of self-determination of the people of Kashmir as protected under international law.’

It means two things : first that the UN in its resolutions on Kashmir had recommended this right for which Pakistan had to vacate all its military forces and Pakistani nationals from the territory of Jammu and Kashmir that was occupied by Pakistan through its regular forces and tribesmen who had invaded the state on October 22, 1947. Pakistan has not done so till date , therefore OHCHR has promoted a fallacy that Pakistan fancies , leaving no one in doubt that how it has done cut and paste job from Pakistani stylebook on Kashmir.

Secondly, this proves Union Home Minister Amit Shah correct that the generations in India are paying the political and diplomatic price for the Himalayan blunder committed by India’s first Prime Minister Jawaharlal Nehru who took the matter to the United Nations even when the Indian armed forces were recapturing all the areas of Jammu and Kashmir that were illegally occupied by Pakistan.

This report has reminded India and the generations that how the horrendous blunder by Nehru has had consequences even seven decades down the line. The Kashmir situation, what it is, where the international groups are coming up with the anti-India reports are the straight outcome of Nehru’s blunders.

Pakistan has welcomed the report almost instantly, perhaps it did not read even the executive summary before hailing it because it knew the contents – the script was written in all probability in Islamabad.

Why should India be reminded of the so-called “ right to self-determination” , and why Pakistan not be censured for occupying the state’s territory and gifting a huge chunk of it to China for Karakorum highway and China-Pakistan Economic Corridor that has started floundering and opposition to which is growing louder .

The so called “ Azad Kashmir “- the definition it gives to the occupied part of the state , and Gilgit Baltistan , have become a de-facto colony of China , and the OHCHR is silent about it .

This document deserves to be consigned to the dustbin of fake news lock, stock and barrel. 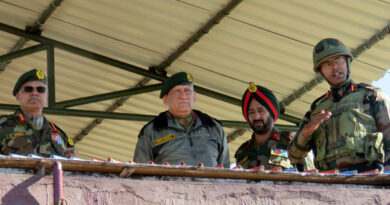