Pakistan army has assumed the role that it should not be. It has taken  sides in the ongoing turmoil in Pakistan that has arisen with the “ Azadi” march . Its claim to protect and support the state institutions in  the country have different meanings , for Pakistan army is known for playing its own games  whenever there political crisis hit the country.

It was stated that Gen. Bajwa that the security gains made by Pakistan army would not be allowed to be reversed at any cost. But what was not clear that what state institutions , it was talking about . It is a well known fact that incumbent Pakistan Prime Minister Imran Khan  was “ selected” by Pakistan army in last year’s elections . That makes it incumbent on Pakistan army to protect  him when faced with the uprising from the people .

Pakistan army is faced with the kind of situation that it had created for Nawaz  Sharif when he was Prime Minister , and it had used Imran Khan to dislodge Sharif . Now Pakistan army has created a similar situation for Imran Khan . This time , as it had done  before, is playing a role of mediator in a different role .This time, it  claims to have assumed the role of the guardian of the institutions of the state . That can mean anything , given the ideological divisions within the army.

According to ISPR,  Pakistan  military’s media wing,  Gen. Bajwa said “Pakistan Army as an organ of the state will continue to support national institutions as and when asked in accordance with the Constitution.

“We have attained better internal security and stability through cohesive national efforts and sacrifices rendered by Pakistan’s armed forces, all national institutions and above all the nation.”

The question is which State institution and the constitution Pakistan army is talking about . Pakistan has neither.

CRPF vehicle met with an accident after pelted with stones at Kokernag, two jawans killed 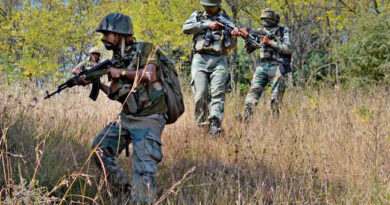