Now Pakistan is vowing reprisal to what it calls “Indian aggression” on Tuesday when Indian Air Force  aircrafts struck at terror camps  in  Pakistani territory. Pakistan has escalated the situation along the LoC by its air strikes targeting the civilian population besides it has  threatened that its National Command  Authority would take stock of the situation signaling that it could deploy its nuclear weapons against India.

Why Pakistan is seeking to hit at India with such intensity .

Going by its own version that the Indian  jets failed to cause any damage , then it should have no reason to grumble . If there is no loss what is making Pakistan so revengeful . That it has vowed to strike at India and give surprise of surprises at the time and place of its choosing , it is clear that it has been hit where it hurts the most. It has lost  its strategic assets that it had accumulated at Balakot , the terror hub of Jaish-e-Mohammad

Pakistan is embarking on a dangerous path , for it  perhaps is oblivious of the fact that its threat of National Command Authority meeting and its implications are not lost on the world . It is spoiling its own chances in the global comity .

The world capitals have repeatedly told Pakistan to act against the terrorists and terror hubs on Pakistani soil and stop using them as the assets to bleed its neighbours . The calls have come from Washington, lndon and paris and even its all-weather friend China has counseled it to resolve the issues amicably. It has been rightly pointed out by observers that not even a single nation in the world has censured India for the terror strikes at the terror camps in Pakistan . That should have served as a message , rather a clear one , to Pakistan that it is not  having the support of the world if it continues to agitate for the terror hubs that it has created on its soil.

Indian claim is that its fighter jets  conducted strikes at Balakot, the training centre of jaish-e-Mohammad, the group that massacred over 40 soldiers in Pulwama in south Kashmir on February 14 .It acted in self-defence as India’s foreign secretary Vijay Gokhle  claimed that the terror facility was preparing for more terror attacks .

Any nation has the right to act in self-defence . That’s what India did.

In the first instance Pakistan claimed that Indian  Air Force jets crossed the Line of Control  that separates Indian part of Jammu and Kashmir from that controlled by Pakistan and made a hasty retreat after  Pakistan Air Force jets  were there to confront them. . That is what  Pakistan’s DG ISPR  Major General Asif Gafoor  wrote on Twitter .

So that means what ? Pakistan was able to make the IAF jets to retreat before they could strike  at the  terror bases in Pakistan. Then the matter should have ended there.

It is furious that its sovereignty has been challenged as India violated its air space . India did not hit any military target of Pakistan, nor did it cause any civilian casualties . The Indian claim is that it hit terror camps that Pakistan was not doing , and these training camps were training suicide bombers the kind of which were causing mayhem in Kashmir.

If this is the matter of mere air space violation with no damage to its any of its  assets , this is something that it should take up with India at diplomatic level . India had given enough of time to Pakistan to act against the terror camps , and when it didn’t  act, India did. .

When Pakistan  issues a threat that it would respond at the time and place of its choosing  and threatens the highest level of retaliation , possibly nuclear , it is an unmistakable reference to the losses it has suffered  and has lost its strategic assets in the form of the future suicide bombers . Had that not been the case , it would not have reacted as furiously as it is doing.

That goes on to prove that the assets it lost were precious to it in bleeding India . That’s why the threat of reprisal and that Pakistan may execute as well.

Explained: What a ‘militant-free’ Baramulla means 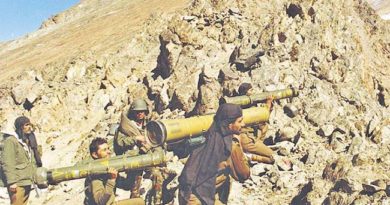 Sacrifices of security forces in Kashmir – an unending saga