A click  and gruesome picture of a three-year-old child sitting  on the lifeless body of his grandfather Bashir Ahmad  following  militants’ attack on a CRPF –Police checkpoint and the crossfire that followed  in Sopore in north Kashmir on Wednesday   was  used  as a  tool to weave a narrative of distortions .

The child’s innocence was exploited to  tell that  “police  killed his Papa ( as it is said ,  he used to call  his grandfather ) . It becomes obvious  when the  child is  asked repeatedly  by reporters that who killed his “papa.” This is a self assumptive question . He is not asked to tell about the incident ‘s details .

Some have morphed the child’s face with a self-assumed ethics that they didn’t want to show the misery and trauma of the child. But the same set of media is unhesitant in saying that the child was eating chocolates and was playing in a tub. How could such a  child be described as  traumatized?” Then his picture on the body is splashed all over – this hypocrisy is reprehensible..

In conflict situations, such narrative building against the security forces is a commonplace for the prompters know that the child’s word would be taken  as the ultimate truth  and that can be used as propaganda to  embarrass the security system.  There is another purpose, rather primarily , to shift the blame from militants and to hide the origin of the incident- terror attack in which CRPF personnel was killed.

The child’s  word  has to be taken as  the truth because there is an attendant  idiom the children don’t lie , then what remains unanswered is that when he is saying so? . A child traumatized by the killing of his grandfather cannot be oblivious to the tragedy that has befallen him .Why should he  choose to tell  different ways – one  is straight that her grandfather was killed by police , and then he makes the bullet sound ,”tak, tak, tak”. In another video he is seen reluctant  to say that “police ne goli mari ( police fired)”. The two  things are related – question and the answer. The question is  asked persistently who killed his “papa” and it is repeated several times before the child haltingly says , “police ne goli mari”.  Aren’t the words being put into the mouth of the child as the morphed images and gaps in between their own tale .

A child sitting on the body  of his grandfather  must have seen police opening fire . The police had opened fire after it had come under attack at the naka targeting militants . The militants, however, had  melted away after the attack, then a child will speak only about the men  whom  he could identify because of their uniform. The child, probably had not seen militant, as he was sitting in car  or maybe he had  at the time of the attack – nothing can be said with certainty . While the militants disappeared ,  policemen stayed back – that  was their duty.  It may be noted here that militants often use combat uniform at the time of such audacious attack .

By the time , the child  reached home , his family had already started circulating  that  Bashir pulled out of his car by CRPF and  shot “him dead.” The catch here is that CRPF and police wear different set of uniforms . At the same time, the child, the sole witness to the incident in the family , could not have said something different than what his family  was telling the neighbourhood and the visitors . 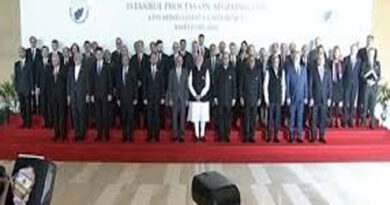 Amritsar declaration on Afghanistan calls for elimination of terror 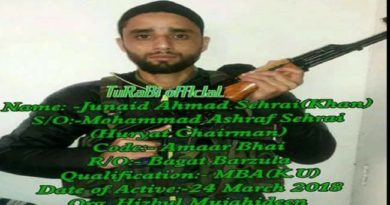