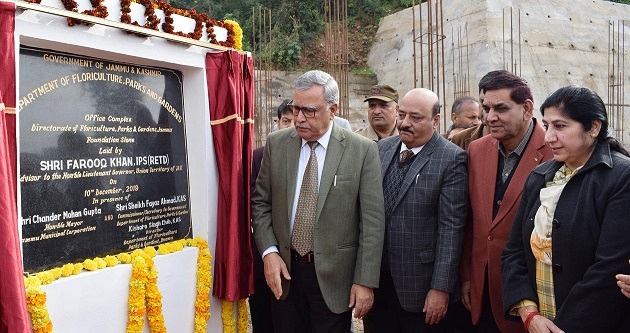 Strengthening tourism infrastructure in J&K is receiving Government’s focused attention, stated Advisor to Lieutenant Governor, Farooq Khan here today while highlighting various measures being undertaken to boost the sector.
The Advisor made these remarks during the laying of foundation stones for building of Directorate of Floriculture, Parks and Garden Jammu and extension of Bagh-e-Bahu (undeveloped area).
The foundation stones were laid in presence of Mayor Jammu Municipal Corporation (JMC), Chander Mohan Gupta; Deputy Mayor JMC, Purnima Sharma; Secretary Floriculture, Parks and Garden, Sheikh Fayaz Ahmed and Director Floriculture, Parks and Gardens, Jammu, Kishore Singh Chib.
On the occasion, the Advisor stated the Government is working on several plans to give fillip to tourism in JK, adding parks in Jammu, especially Baghe-Bahu has remained a major attraction for domestic and international tourists. He said several innovative steps are being initiated to boost tourism and focus is being laid on development of tourism-related infrastructure in Union Territory of J&K.
Advisor was briefed about the outlay plan of both the projects where he was informed that the directorate office would come up at an estimated cost of Rs. 3.87 crore to be completed in three years.
The Advisor was also informed that the budget for extension of Bagh-e-Bahu project being raised on 25 kanal of land next to the main garden is seven crore rupees which will be completed in three years. He was informed that the extension would be comprised of Amphi Theatre Park, kids zone with children corners, artisan haat, graffiti wall, joggers park, illumination system, open air gym and other attractions to increase tourist footfall.
Advisor Khan also suggested the beautification of Baghe-Bahu entrance with natural ambience. He also stressed on income generation models for Jammu parks to attract local residents as well as tourists.
Later, Advisor Khan along with Jammu city Mayor and Deputy Mayor planted tree saplings in the garden premises. 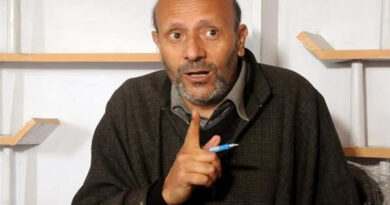