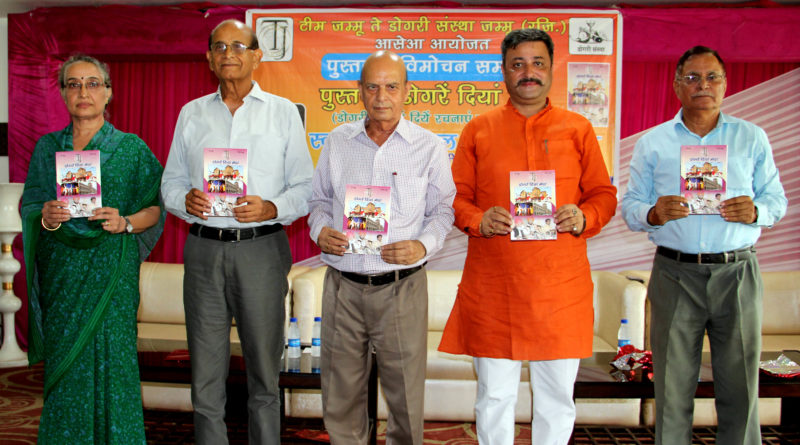 The book contains poems by the leading Dogri poets, who have expressed their concern and anguish at the injustice which has been done to Dogri and Dogras with the changed political scenario of J&K, the poets have given expression to the expectations of the people of Jammu from the new dispensation. The poets who have contributed to this book include, Late Sh.Chatrapal, Inderjeet Kesar, Gaineshwar Sharma, Randhir Singh Raipuria, Ashok Khajuria, Abdul Qadir Kundria, M.S. Kamra, Arsh Dalmotra, Tarachand Kalandari, Smt. Vijaya Thakur, Sahil Badyal and Pawan Verma.

The book was released by Padam Shri Dr.Jitender Udhampuri who was the Chief Guest on the occasion and the book as well as the released ceremony was dedicated to Late Sh. Chatarpal who passed away very recently and one of his poem is included in the book. Rich tributes were also paid to late Chatterpal by the noted poets present on the occasion.

Dr Jitender Udhampuri, while speaking on the occasion said that the poets are the concessions keeper of the society. Whenever there is any injustice being done to individuals communities or some particular sections of the society, the poet is always in the fare front to raise his/her voice against the injustice. Dogras have been subjected to step-motherly treatment by the Kashmiri rulers of the state for very long time. The political class of the society may not have raised its voice against this for political considerations but the poets have not hesitated in expressing their strong resentment.

Prof. Lalit Magotra, President of Dogri Sanstha, while expressing his views said the Dogra society is watching and observing very keenly, whether it will now receive justice in the new set up. The Dogras hope that their long pending aspirations with now be fulfilled and they will get long awaited justice in the matters pertaining to jobs, social & political justice. The Dogra culture and heritage will get importance that is deserves.

Addressing the large gathering comprising of senior citizens and young volunteers, Zorawar Singh Jamwal, Chairman Team Jammu said that people of Jammu have always made sacrifices for the country, especially in the last 32 years, Jammu region has sacrificed maximum number of its youngmen in the ongoing turmoil, and the Dogras now expect that the country should also repay them back. He paid rich tributes to Late Sh.Chhatrapal, who he said, was not only and excellent writer but also a finest human being. Zorawar Singh Jamwal reminded the audience that it was a Teachers Day today and stressed that he treats all writers, including those who have contributed to the released book, as his teacher. He said his team and he will always fight for the cause of Dogras & will be ever ready wherever Dogri Sanstha requires their services for such causes.

This programme was anchored by Prof. Shashi Pathania Vice President of Dogri Sanstha, who also conducted the recital of poetry by poets who have contributed to the book. Gianeshwar Sharma, Sr.Vice President Dogri Sanstha thanked the audience & the media at the conclusion of the programme. 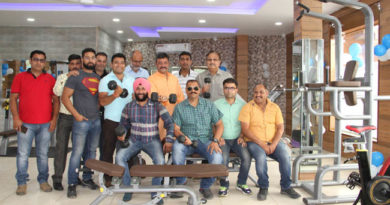