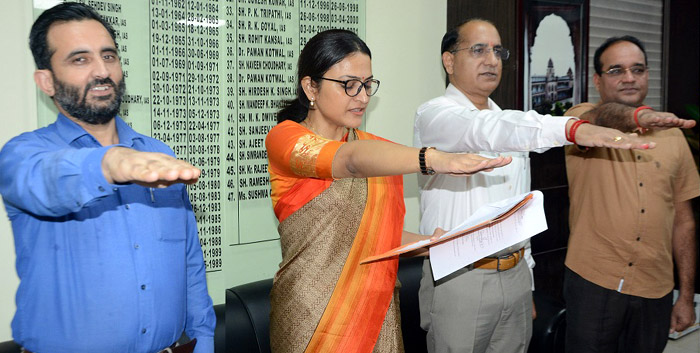 The day is celebrated to commemorate the birth anniversary of Sardar Vallabh Bhai Patel – the architect of united post independence India.

The pledge of maintaining unity and integrity of the country was administered to the participants present on the occasion.

A scintillating cultural program was presented by artists of cultural wing of the Information department along with renowned artists.

The Additional Commissioners highlighted the role of Sardar Vallabhbhai Patel in upholding the Indian Unity. They said the leader worked on national integration and devoted his life to the nation. The occasion strengthens the spirit of oneness, peace and amity in Jammu and Kashmir as well as the nation,” they added.

The DC and the officers and officials pledged to dedicate themselves to preserve the unity, integrity and security of the nation and to strive hard to spread this message among the fellow countrymen.

The run was flagged off by the Additional Deputy Commissioner, Jammu (ADC), Rishpal Singh.

Senior functionaries of Education Department and Department of Youth Services & Sports, several District and Police officers, large number of students, sportspersons and people from all walks of life assembled at Vivekanand Chowk for the run.

Ramban: A ‘Run for Unity’ was organized in Ramban district to mark the Rashtriya Ekta Diwas.     The event was organized by the Education, youth Services and Sports and police departments which was flagged off by the Deputy Commissioner (DC),   Nazim Zai Khan   from District Administrative Complex, Ramban.

The event witnessed a ‘Run for Unity’ organized by District Police Poonch from DC office complex to Sports Stadium Poonch, which was followed by a unity pledge and March past.

Samba: Deputy Commissioner Rohit Khajuria flagged off “Run for Unity” to commemorate the Day in Samba.

District Officers, students and people from all walks of life participated in the 1 km run.

District Development Commissioner,   Dr. Piyush Singla was the chief guest who flagged off a rally “Run for Unity” from DC Office Complex.

The run was flagged off by the Deputy Commissioner (DDC), Angrez Singh Rana and SSP, Dr. Harmeet Singh Mehta.

Doda:  To commemorate ‘Rashtriya Ekta Diwas’   a ‘Run for Unity’ was held here from sports stadium. It passed through the main areas of the Doda town and culminated back at the take off venue.

The run was flagged off by the Deputy Commissioner (DC), Dr Sagar D Doifode and SSP, Mumtaz Hussain.

The marathon commenced from Dakbanglow, which after passing from Kachhar Ground, Gujjar Mandi, ALG culminated back at the take off venue.

Kathua: District Development Commissioner, O P Bhagat flagged off the run for unity to commemorate the 144th birth anniversary of Sardar Vallabhbhai Patel. The unity marathon began from GDC Kathua, witnessing participation of a large number of people, including NYK volunteers, sports enthusiasts, students and District officers among others.

Jammu and Kashmir to get delimitation commission 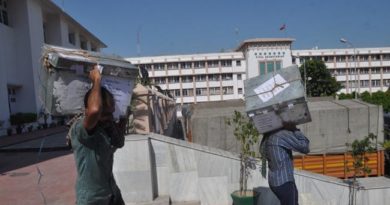 Darbar move on April 28, will open at Srinagar on May 7