In a unique move, an Animal Husbandry Department official of J&K”s Reasi district has taken to paragliding to reach out to people in difficult hilly terrains to apprise them of the state”s free vaccination scheme for cattle to protect them from the foot and mouth disease.

The unique video of district”s Chief Animal Husbandry Officer Ramesh Razdan paragliding over hilly hamlets in the district and urging people on loud speaker to get their cattle vaccinated against the rogue ailment has gone viral in Jammu region.

Foot and mouth disease (FMD) is a severe, highly contagious viral disease affecting livestock like swine, sheep, goats and other cloven-hoofed ruminants and has a significant economic impact.

Reasi”s Veterinary Department has embarked on a “free vaccination drive” to cattle amid the outbreak of the FMD.

Also a trained paraglider, Dr Razdan has resorted to the innovative move in a bid to reach out to maximum people in hilly areas. He has already para glided to several difficult terrains like those of Darmadi, Chasana, Mahore, Arnas, Thakarkote, Poni, Bamla in the district.

And while flying over various destination helmets, he also urges people on loudspeaker to have their domestic pets vaccinated free of cost and save them from the FMD affliction.

“This novel idea came to my mind to use para glider for spreading awareness about FMD and free vaccination to cattle among the people living in the most difficult and hilly areas of the district. I took to para gliding to launch the campaign for FMD stage-2 program,” Dr Razdan told .

Razdan said it was the best way to reach out to the people in the difficult mountainous.

“We also gave videos of this campaign to local cable channels for educating people and this too is proving fruitful as villagers have begun approaching us for vaccination of their cattle,” said Razdan.

The chief animal husbandry officer said his department has fixed a target of vaccinating at least 1.75 lakh animals by July 29.

“Mokhara (FMD) ko hatana hai, gai ko bachana hai. (FMD has to be eliminated and cows have to be saved.),” Razdan is heard urging people on viral videos while para gliding over hilly hamlets.

He is further heard telling people that his department has launched stage 2 of the anti-FMD drive, under which his department”s officials would be visiting villages in each panchayat to vaccinate cattle.

“I have requested my field staffers, attendants and vets to intensify vaccination drive,” said Razdan.

Jammu and Kashmir had faced FMD outbreak last year too during which 12 animals had died, said AHD officials.

In one of its first Cabinet decisions after assuming office for a second term, the Narendra Modi government on May 31 this year approved the National Animal Disease Control Programme for FMD and brucellosis.

The anti-FMD component of the scheme envisages 100 per cent vaccination coverage of cattle at six months interval in the entire country.

The brucellosis control component of the programme envisages 100 percent vaccination coverage of female cattle and buffalo calves of four to eight months of age once in a life time.

The FMD and brucellosis also causes infertility amongst the animals. The infection of brucellosis can also be transmitted to the farm workers and livestock owners. Both the diseases have a direct negative impact on the trade of milk and other livestock products, said a recent PIB release of the Union government. 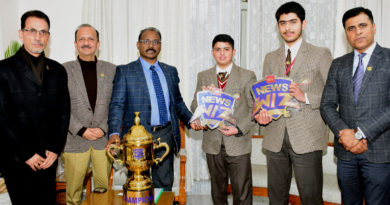