NITI Aayog CEO Amitabh Kant said while the COVID-19 lockdown had been successful in controlling an even more widespread coronavirus outbreak, the migrant workers’ crisis was handled poorly.

The government – at the centre and in states – could have done a lot more to take of care of migrant workers who have had a gruesome time because of the nationwide COVID-19 lockdown, Amitabh Kant, the CEO of the NITI Aayog said on Friday.

Crores of migrant labourers, working at factories, construction sites and brick kilns across the country, were left without food, shelter or income when the central government announced a sudden nationwide lockdown in late March – two months after the coronavirus pandemic hit India.

Earlier this month, after lakhs of migrants set out for their village on foot, producing haunting images of pregnant women and exhausted children walking on the country’s highways, the central government agreed to run special trains and allow buses to ferry them.

Speaking to NDTV, Amitabh Kant, Chief Executive of the government’s think tank said while the lockdown had been successful in controlling an even more widespread virus outbreak, the migrant workers’ crisis was handled poorly.

“It is important to understand that migrants issue was a challenge because over the years, we have created laws which have led to a huge amount of informal workers in economy,” he said.

“This was the responsibility of the state governments to ensure that the workers were well taken care of. In a vast country like India, federal government has a limited role. This was a challenge where I think we could have done a much, much better job of taking care of every single worker at the state, local, district level,” Mr Kant said.

Dozens of migrant workers have fallen sick or died on their way home, either from fatigue or in accidents, underscoring the extreme risks the poor have been exposed to under measures to stop the spread of the coronavirus.

The government has responded to criticism of its handling of the migrant worker crisis by promising extra finance to get those stranded back home and provide food rations.

Under lockdown since March 25, India has reported more than 1.18 lakh confirmed cases of COVID-19, with 3,583 deaths. 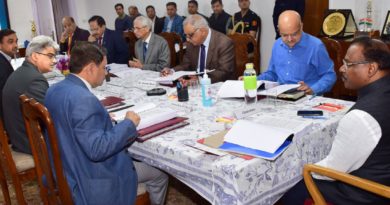 Not ready for peace with India without resolving Kashmir issue in just manner: Pak FM