From dawn to dusk, and sometimes from dusk to dawn as well, the hours pass by in wakeful alertness for paramilitary troopers tasked with ensuring law and order in a land that is many hundred miles from home.

In the long hours of the night, as others try to get some sleep, Central Reserve Police Force (CRPF) jawans can be heard stomping through the silent streets, armed with lathis and alert to any signs of trouble that might break out in Kashmir’s main city.

The days go in maintaining law and order and manning checkpoints set up in Srinagar and across Kashmir Valley, where restrictions were eased this weekend after August 5 when the Centre revoked Jammu and Kashmir’s special status under Article 370 and announced its bifurcation into Union territories.

The night brings with it more challenges for some jawans whose workday doesn’t end, but continues in ever watchfulness till the early hours of the morning, officials said.

CRPF Assistant Commandants Sanjeev Yadav from Uttar Pradesh and Bhanushekhar from Bihar are among those frequently patrolling through the city at night.

“Precaution is better than cure,” Yadav said while marching with his team in the interior areas around Dal Lake.

A breeze with the hint of autumn cools the air as the jawans take to the streets after a day of hectic law and order duties.

It’s not just about patrolling. The day for a paramilitary jawan begins early because morning deployment has to be completed before sunrise, said Yadav.

Special care has to be taken to ensure that terrorists have not planted IEDs (improvised explosive devices).

After August 5, barricades came up across the city, particularly in the sensitive downtown area where protesters often pelt stones at security forces.

The important strategy of round-the-clock deployment of paramilitary troops has yielded dividends with stone pelting incidents localised at the ‘mohalla’ level, officials said.

Thousands of CRPF personnel and other forces have been deployed in Srinagar and other parts of the Valley since August 5.

Purushottam Kumar, an assistant sub-inspector of the Sashastra Seema Bal (SSB), a force placed at the disposal of the CRPF, is posted near downtown Srinagar’s Sekidafar area.

The makeshift checkpoint he is manning came up on the intervening night of August 4 and 5, said Kumar.

“Small group of youths emerge from lanes and bylanes and disappear after hurling stones at us,” Kumar, who hails from Himachal Pradesh, said.

His senior, Khobram Drai from Arunachal Pradesh, said the challenges are many.

Guarding the area leading to SMHS hospital near Sekidafar, Drai said his team has to make sure the road is clear, day and night.

“People come for treatment here and we do not wish to delay their entry into the hospital. Some rowdy elements do not understand this. We have been meeting elders of the nearby locality but not much has changed,” he said.

Across the city, alert jawans can be seen moving around through the day.

A checkpoint set up near Ail Masjid, the second oldest mosque after historic Jama Masjid, is buzzing with activity. It is the main entry point into Srinagar from Ganderbal in central Kashmir and CRPF Assistant Commandant Bhanushekhar carefully checks all vehicles with a torch.

A pitched battle is just over and Bhanushekhar said he has to be extra cautious so that no terrorist or any arms and ammunition slip into the city.

“You see, this road connects to interiors of downtown and, as the saying goes, ‘savdhani hati, durghatna ghati’ (If you stop being careful, there will be accidents),” he said.

Banushekhar said jawans get tired after long hours of duty and it is important to keep the morale high. “One has to keep them motivated and I often give them lectures,” he said.

Part of his motivational lecture is telling his teammates that they are part of history and are playing an important role in the making of a new Kashmir.

“We have to keep a watch even at the skies during night. No one knows when a grenade or a petrol bomb is thrown. There are some notorious elements keen on instigating CRPF personnel but we are a disciplined force.

“Antisocial or antinational elements generally take cover behind old people and children and hurl stones at us… We will never lathi-charge or take action when the old and children are at the front,” he said.

Communication with families is an important part of his job.

“Every company commander has been given a phone and the jawans are allowed to speak to their families for sometime after performing their duties,” said Yadav.

The jawans are authorised to share the number with their families so that they can be contacted in case of emergencies.

“I do receive calls from the families of jawans in the night and while hearing them talk, I find myself part of their family,” Bhanushekhar said. 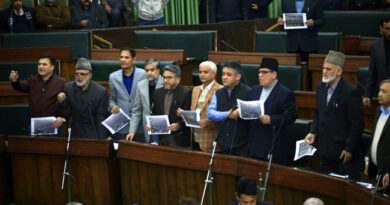