Taking strong exception of the decision of the Union Government to withdraw five years age relaxation granted to youth of J&K in the Civil Services examinations, Team Jammu on Thursday termed this decision as cruel joke with the nationalist youth of Jammu province.

Addressing meeting of executive of Team Jammu, Zorawar Singh Jamwal, Chairman of Team Jammu, regretted that instead of encouraging nationalist youth Union Government is discouraging them by taking such disastrous decisions. “Victims of the militancy and discriminatory policies of the successive state governments since decades, educated unemployed of Jammu would be the worst suffer of Centre’s decision to withdraw age relaxation”, Team Jammu chief said and expressed surprise that instead of announcing some incentives of youth of J&K, government is rather withdrawing existing relaxations.

“As very few jobs advertised in J&K, majority of educated unemployed from Jammu region applied for central services but after withdrawing age relaxation majority of them would be debarred”, Chairman Team Jammu observed and urged the Union Government to reconsider its decision.

Zorawar Singh Jamwal further reminded that after eruption of terrorism in J&K in 1990, the then Union Government had announced age relaxation of five years for the youth of J&K to provide them opportunity to apply for central services jobs.

Upper age limit for appearing in the Civil Services examinations is 32 years for General category, 35 for Other Backward Classes (OBCs) and 37 for Scheduled Castes (SCs). However, the youth of Jammu and Kashmir had five years relaxation in upper age limit in all categories.

“There is no big improvement in the conditions, which were existing in 1990s when age relaxation had been granted so there is no reason to withdraw the same relaxation”, he said and warned that youth of Jammu would not tolerate such cruel joke with them.

To ensure a peaceful summer, police have a new mantra: coax militants to surrender 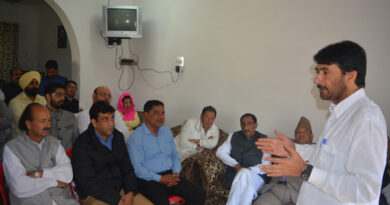