‘Action on Pak-based terrorists only after due consideration’ 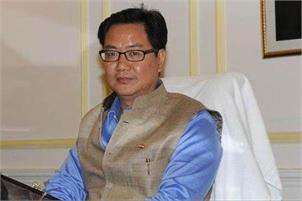 New Delhi, Sep 20 (PTI) Any action against terrorists based in Pakistan will be taken only after examining all relevant issues, Union Minister Kiren Rijiju said today.

“Action will be taken after due consideration. Action is not taken after making announcements,” he told reporters here.

The Minister of State for Home made the remarks when he was asked whether the government was planning to carry out a strike against terrorists camps based in Pakistan.

Eighteen soldiers were killed after heavily armed militants, suspected to be from Pakistan-based JeM, stormed an army base in Uri in Jammu and Kashmir on Sunday.

There have been various reports suggesting that the government was exploring options on how to deal with the terror emanating from Pakistan.

“It is a very serious issue and we should not indulge in any war of words. So many lives have been lost, people’s sentiments have been hurt. The matter cannot be handled just like that,” Rijiju said.

Vaccination must for teaching and non-teaching staff prior to opening of schools, colleges