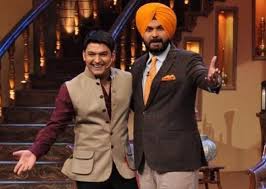 Here we have some news to break for all Kapil Sharma’s fan out there! The popular stand-up comedian-actor is all set to enter politics! Yes, you read that right, Kapil Sharma is in news from past few weeks and is gaining a lot of attention for his latest controversy. We can now easily say that comedian Kapil Sharma, is the new KING of controversies. Recently, we heard that on Monday, a FIR was registered by Versova police Mumbai against the actor under section 53(7) of Maharashtra Regional Town Planning Act (MRTP), for alleged violation of the Environment Act.

The heartthrob actor allegedly dumped the debris near mangroves behind his bungalow in suburban Versova. He further also undertook some illegal construction near his bungalow which is located at Four Bungalows area in Andheri (West), Mhada Colony. The comedian purchased this bungalow from a businessman on November 7 last year. It seems as if the actor has violated rules. Mumbai suburban District Collector Deependra Singh Kushwah told his police officials to conduct a survey to find out whether Kapil had violated the Act?

Soon, after finding out the truth the Oshiwara police filed a police complaint against Kapil Sharma and further also submitted the mangrove cell report to the higher authorities. We also heard that the Brihanmumbai Municipal Corporation (BMC) official have complained against unauthorised construction at Kapil Sharma’s flat in suburban Goregaon

“We have recorded a case under Sp LAC (special local Acts) No 87/16 U/S 15 (1)(2) Environment Act against Sharma,” Mumbai police spokesperson DCP Ashok Dudhe told PTI. Earlier this month, Kapil Sharma grabbed a lot of eyeballs for his controversy by stating that he had been asked to pay a bribe of Rs 5 lakh by an official of BMC. He further even stated that he had flouted norms not only in his Versova office building but also at his apartment which is located at Goregaon.

Kapil Sharma tagged Prime Minister Narendra Modi in his tweet and expressed his anger on his social media – Twitter on September 9. Have a look at his tweet:

“I am paying Rs 15 cr income tax from last 5 year n still i have to pay Rs 5 lakhs bribe to BMC office for making my office @narendramodi (sic),” Kapil had said in the tweet.

“Yeh hain aapke achhe din? @narendramodi (are these your good days),” he sought to know in another tweet, referring to Modi’s 2014 poll slogan of “good days are ahead”.

I just voiced my concern on the corruption I faced with certain individuals..Its No blame on any political party be it BJP, MNS or ShivSena

Following the controversy, Sharma tweeted once again: “I just voiced my concern on the corruption I faced with certain individuals..It’s No blame on any political party be it BJP, MNS or Shiv Sena” (sic.)

Kapil Sharma’s tweet went viral and further even Maharashtra chief minister Devendra Fadnavis asked the comedian to reveal the name of the officer who demanded bribe. Soon, within no time, Kapil Sharma’s controversy was given an political angle when Congress members held demonstration against the BJP-Shiv Sena led BMC. Later on, even BJP launched a wide campaign against Kapil. “Kapil knows that his recent tweet has caused a political controversy which can lead to certain protests from political groups and associations outside his home and shooting area,” a report by Spotboye.com said.

Later on there was news that the popular comedian might end up in jail for 3 years if cops found him guilty. Raj Thackeray-led MNS also filed a complaint against the actor for keeping mum on his allegation that civic officials had demanded money from him. He further even said that Kapilhas violated his building norms. ”In this case, Sharma did not act as a responsible citizen and failed to live up to his duty. Therefore, I have demanded the police officials to go into the merits of my complaint, convert it into an FIR and call him for further investigation,” Deshpande said.

”In an attempt to divert attention from the main issue of bribery, the BJP, Shiv Sena and MNS have accused Mr Sharma of illegal works in his office and threatened him with demolition and other drastic actions. I personally believe the municipal authority has all the right to take action against any illegal structure in Mumbai,” Nirupam said. “But in this case, it seems they have targeted Mr Kapil Sharma, a whistleblower, since he is an artiste and a soft target, with the sole intention of suppressing the bribery issue. It is a well known fact that in Mumbai, common man cannot get any work done without paying bribes,” he said.

“The long list of illegal constructions are not as per the approved plans. If at all the CM wants to take a high moral ground, he should take action against all illegal constructions rather than targeting a whistle blower which will only result in suppression of truth,” Nirupam said. The comedian is quite popular amongst all and has a huge fan following which is nearly 63 lakh followers on his social media. As soon as, Kapil tweeted and soon within no time there were several sharp reactions which started coming up.

Talking about Navjot Singh Sidhu, who became the talk of the town as soon as he resigned from Rajya Sabha seat. Few weeks back, there was news which stated that Sidhu was planning to quit the most popular comedy show “The Kapil Sharma Show” which airs on Sony TV. Sidhu quit the Rajya Sabha membership just three months after his nomination to the Upper House by Narendra Modi government. It seems as if Sidhu wants to be more active in politics. But later on, the creative director of the show Preeti Simoes, refuted the rumors and slammed the reports. Preeti Simoes further also confirmed this news to Times of India exclusively and said “It’s a false news.” A close source was further quoted by DNA saying, ”There’s a lot of pressure on Sidhu Paaji to quit our show. If it’s true that has quit the BJP for the AAP. We’ve heard that Paaji has been instructed to stop participating in the comedy show, as he needs to revamp his image.”

Few months back, Sidhu joined new political team Aawaz-e-Punjab which was formed by Congress leader Jagmit Singh Brar. Their party launched on September 9 and he was the chief ministerial candidate of the party. Sidhu was the founding member of the party. But, on Wednesday, Sidhu said that his “Aawaz-e-Punjab front won’t be a political party anymore, but a forum to work for the betterment of Punjab. He further even added saying Aawaz-e-Punjab forum welcomes any alliance for the betterment of Punjab and will not be a political party.”

“I am an individual, I have only picked up issues of my zone. Not being allowed to do. She said that this isn’t democracy, but dictatorship. “If I raise social issues,how is it anti-party activity?”, Sidhu’s wife Dr. Navjot Kaur added. His wife, Navjot Kaur, was quoted by ABPlive.com saying, “Sidhu will now completely focus on Punjab politics. And that is why he has recorded all the shows till 30th September and has already said goodbye to the cast.”

Now after all these latest controversies, it is clear that Navjot Singh Sidhu has planned something really big in his mind. As Sidhu and Kapil Sharma hail from Punjab and share a good bond with each other, there are high chances that the comedian might join his mentor’s political team. Is Kapil Sharma trying his best to join politics? If Yes, then what will happen to his popular comedy show “The Kapil Sharma Show”? After stand-up comedy, is politics on mind for Kapil Sharma? Is Kapil Sharma’s twitter post an indication of him joining Navjot Singh Sidhu’s political agenda? What do you think, do let us know in the comment box below.