Senior PDP leader Shah Mohammad Tantray resigned over ‘unnecessary expulsions’ of 8 leaders. He also called Article 370 ‘deadstock’ due to amendments by Congress in past.

Senior PDP leader Shah Mohammad Tantray has resigned from the primary membership of the party, citing his unhappiness with it over “unnecessary expulsions” of leaders for meeting Lt Governor G C Murmu here.

The 64-year-old leader, who was elected to the state assembly on a PDP ticket from the Poonch-Haveli seat in 2014, said Article 370 had become a “dead stock” as a result of nearly three dozen amendments during the Congress rule.

The PDP had said, “In view of the development post August 5 and the unilateral move of the government of India which has violated the will and hurt the sentiments of people, it has come to the attention of the party that certain party leaders have been part of the parleys which go against the interests of the state, official position and core beliefs of the party.

“The party disciplinary committee has recommended the expulsion of all these leaders from the basic membership of the party.”

The expulsion of the eight leaders followed the resignation of four more party functionaries — former MLA Rafiabad Yawar Mir, PDP state secretary Mir Samiullah, Muntazir Mohuiddin and Syed Showket Gayoor — amid speculations that Bukhari is launching a new political party with the help of disgruntled leaders in the PDP, the Congress and other parties.

Tantray said the expulsion of the party leaders was not in a “good taste” as they should have been served a show cause notice first.

“After a thought, I decided to say goodbye to the party on the call of my conscience,” he said.

“I will decide the future course of action after consulting my colleagues, friends and well wishers on the issue of joining hands with Bukhari,” he added.

Tantray said he was dejected after the party announced expulsion of eight leaders for meeting the Lt governor. He said he had demanded a review of the “wrong decision” but there was no response from the party on the matter.

“Meeting Lt Governor is not a crime…In the present scenario, we have to talk to the Centre and the Lt governor, and raise the demand for restoration of the statehood along with protection to the lands and jobs akin to the constitutional provision available to Himachal Pradesh. It is possible only through dialogue,” he said.

Tantray said Article 370 was a “dead stock” in the wake of nearly three dozen amendments in the provisions during the Congress rule.

“With or without Article 370, we are linked with our country. The people need to come forward and help in improving the situation,” he said.

He said demands of regional parties like PDP’s self-rule were “hollow slogans” and “we need a new approach to move forward to take the erstwhile state to peace and prosperity”.

After the death of PDP founder and former chief minister Mufti Mohammad Sayeed, who was a “charismatic leader”, the party is in disarray which started with the “unfortunate” expulsion of prominent leader and former finance minister Haseeb Drabu, Tantray said.

Dozens of PDP leaders including former ministers and legislators resigned from the party after the fall of the PDP-BJP government in June 2018, with majority of them joining the People’s Conference headed by former minister Sajjad Gani Lone. 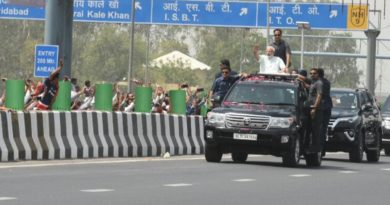