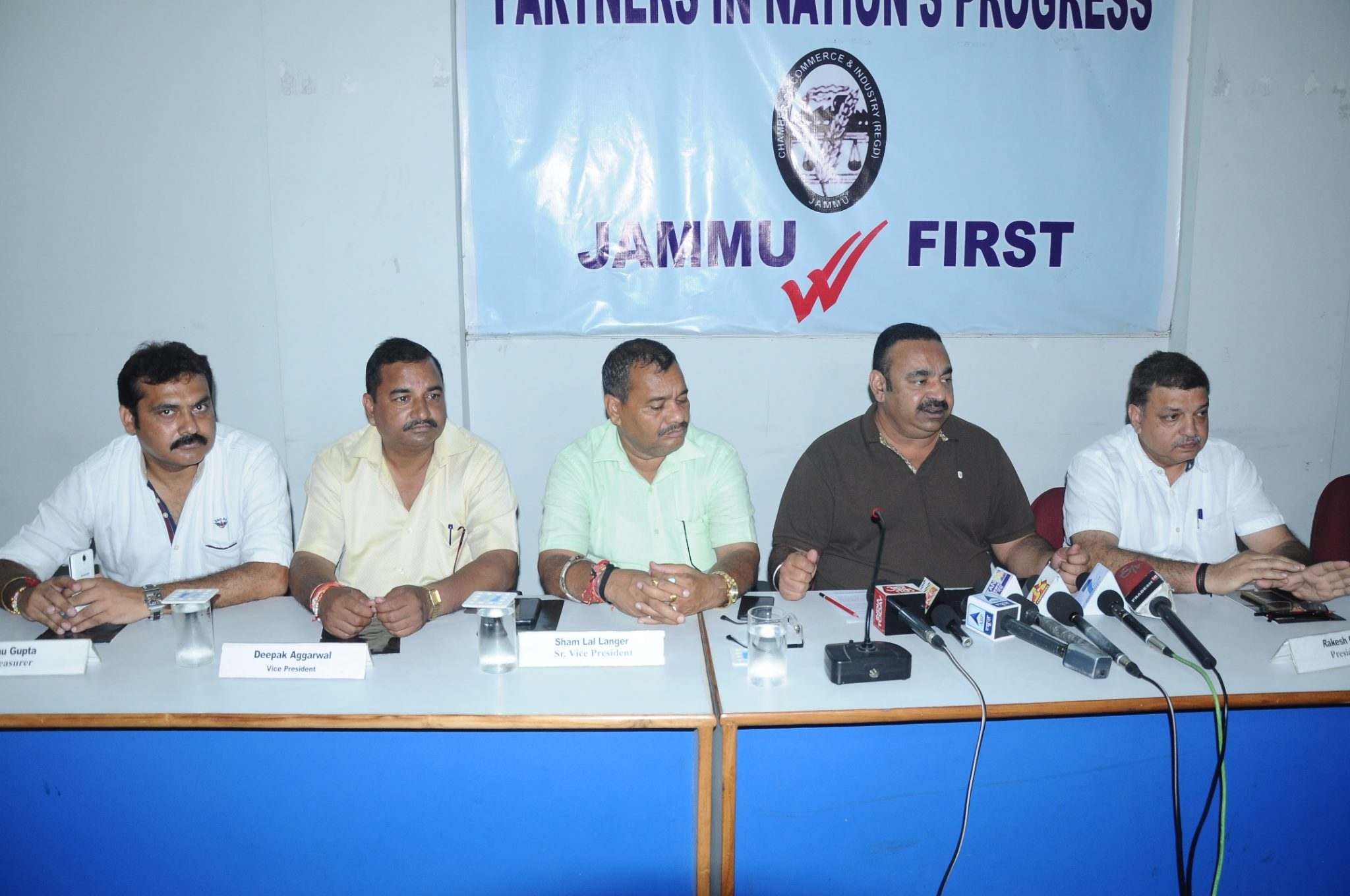 Jammu, August 19: The President Chamber of Commerce & Industry Rakesh Gupta and his team have received communications from few but prominent members of influence from the Kashmir Civil Society to give atleast a weeks time to convince the stakeholders in Kashmir other than the government for intra region dialogue. In view of this assurance the Chamber feels that reasonable time be given to the nationalists forces in Kashmir who are trying to urge and impress upon the masses there for an early intra region dialogue. Hence,  the call for Jammu bandh on Saturday 20th August 2016 is here by deferred till further information, but at the same time our following demands and the questions to the ruling coalition,  BJP in particular as well as the law enforcing  agencies be answered and implemented without any further delay.

The Chamber expressed serious concern that the law of the land was being made a mockery off everyday where in Social Media, Print and Electronic Media  was being misused to misguide and provoke religious sentiments against the Indian State. The Chamber also questions that how the Religious places were being permitted to make announcements other than religious activity and rather being used to make announcements to wage war against the Indian State. The Chamber questions the Law Enforcing agencies in the state for the silence and demands immediate action against the culprits failing with the Chamber shall have no option but to file a PIL in the Hon’ble Court for justice.

The Chamber also expresses and questions the government for no action against their employees for their unauthorized absence from duties. The Chamber is seriously concerned that how can the employess be paid salaries without work in a state where the salary bill is more than 3000 crores per month and it’s a common man’s money that is being misused.

The Chamber also demands that in wake of the present law and order situation the Darbar Move should be moved  back to Jammu as its 40 days that no work is being done and neither the public in general can reach the secretariat . The Chamber also appeals to the Hon’ble Chief Minister to direct all the Ministers to have their camp offices in jammu till the decision to move darbar to Jammu is done so that the common man could approach and meet them for their grievances.

The Chamber expresses their solidarity with the nationalist forces and the law enforcing forces and thank them for their sacrifices to protect the Indian state.

The Chamber also strongly condemns the beating of Drivers and attack on transport services carrying essentials services, pilgrims and tourists in the Kashmir Valley.

The Chamber also questions the State and the Union Government that who shall compensate the business losses of the traders, Industrialists, Transporters and the tourism sector in Jammu province.

The Chamber urges to the Finance Minister to extend the date for filing of VAT Returns and Vat Taxes for the first quarter for atleast 3 more months.

The Chamber shall also call upon the Hon’ble Union Finance Minister Arun Jaitley on Aug 21 and convey to him the ground situation in our state where the economy has been shattered and business and industry are on the verge of collapse hence there should be no pressure tactics on the business houses for the IDS as we are already paying taxes honestly.