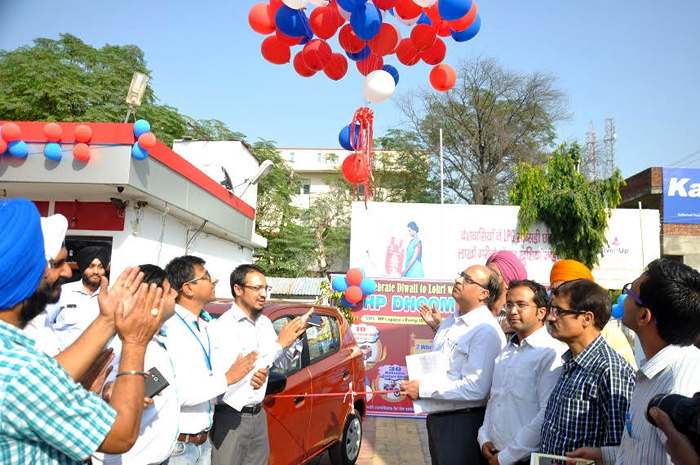 The chief guest on the occasion was Chief Regional Manager J&K Retail Regional Office, Krishan Lal, who highlighted the role played by the corporation in nation building and the economy of the state. The grand event was inaugurated in presence of HPCL officials and dealers at its retail outlet M/s Tawi Service Station, Channi Bye Pass Jammu. The campaign is expected to run successfully for upcoming 3 months.

The event wasorganized by HPCL J&K Retail Region under the leadership of CRM Krishan Lal and its other officials including K L Kichloo, Sh Sukhwant Singh Kahlon and various prominent dealers of state. Zafar Rashid, Sr Sales officer informed the gathering about the HP Dhoom Dhamaka Campaign, Lube Sales Campaign and the Facility for payment through Paytm, at HP Petrol Pumps.

Winners of prizes will be declared through an online draw. As per the scheme, on every petrol refill of Rs 200 in 2/3-wheelers and Rs 700 in 4-wheelers, the customers need to send an SMS with the invoice number and the Pump ID across North India. 10 Cars, 30 Bikes and 1062 4 Burner Gas cook tops will be distributed as prizes at the end if the campaign. Customers will also be receiving a cashback for every payment through paytm wallet in addition to daily and monthly bumper prizes.