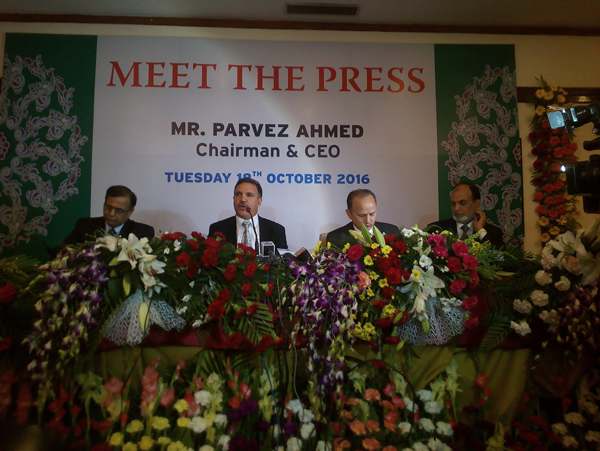 Talking to media persons in Jammu after taking over as Chairman of the JK Bank recently, Parvez Ahmad said that the losses incurred by traders and trade related to tourism have suffered losses due to the unrest which has been indirectly been passed over to the bank.

He said, “This (losses due to unrest) have complicated the financial situation.”

“We have moved an application for appropriate measures to RBI in this regard and bank is committed to support traders and borrowers to tide away the impact of unrest in Kashmir which has hit every aspect of economy”, Chairman said.

Putting forward the approach to resolution of NPAs besides recovery in stressed assets, he said, “We are gearing up to resolve and recover the bad assets (9.3 pc) and stressed assets (10 pc), through available mechanisms like legal recourse, one-time settlements or selling them off to Asset Reconstruction Companies.

Laying emphasis on improving the Balance sheet of the bank the Chairman said that JK Bank had come up with novel strategy to recover Non Performing Assets(NPA) which is about 10 percent at present. He noted, ” The plan include legal recourse, one-time settlements and asset Reconstruction Company to improve NPA recovery. We have faced some problem due to unrest but bank is hopeful of recovery”. He said that banks across India were reeling under massive  NPA burdern but JK Bank  is committed to recover them as fast as it was possible

Speaking on the issue of having  Islamic Banking system, the Chairman said that J&K Bank can go ahead with that subject to the approval by the  RBI.

“We cannot decide alone on Islamic banking but RBI is also studying it and its possible impact as there have been demands raised by several institutions. Whenever it will get approval, Bank will too follow”, Parvez said.

Describing women as key enablers of empowerment, Chairman announced that Bank, in line with honorable Chief Minister’s vision, will soon be establishing two business units (branches) exclusively for women, one each in Srinagar and Jammu cities. These branches would be run only by women staff of the bank. “Besides, we will be tailoring and introducing specific schemes for women with a special focus to promote and nurture entrepreneurship….. The loans offered to women shall be at concessional rates of interest”, informed the Chairman.

He further stressed on the Bank’s plans to encourage social and cultural enterprises as also entrepreneurship with a view to give boost to rich art forms, handicrafts and cultural heritage of the state. “Basoli paintings owing to their artistic excellence and national & international acclaim is a case in point”, he observed.

Maintaining that empowerment is subservient to education, he outlined his strategy to give boost to education finance by making it hassle-free, offering competitive rates of interest, entering into tie-ups with reputed academic and professional institutions across India and organising Education Loan Mela during admission season an annual feature. “Information Technology specific education finance products will be a priority”, he said.

The bank would extend complete support to tourism industry in line with the regional requirements, he said, adding, innovative products and services would be devised to explore potential of religious tourism in the state. “Specific products for pilgrims from across country coming to ShriAmarnathjiYatra and Mata Vaishno Devi pilgrimage would be devised on priority ”, he stressed.

“Our focus from now on will be future. We will concentrate on developmental initiatives, potential business areas, innovative productisation, social banking, micro-financing, under-serviced and unorganized potential sectors to streamline financing structure and customer service up gradation”, he stressed.

Stating that encouragement of the local industry will remain one of his top priorities, Chairman said that Bank will be supporting the industrial sector through effective delivery mechanism and valuable inputs from the industrialists.

Laying emphasis on customer service, Chairman announced the establishing of Customer Grievances Redressal Cell in Chaiman’ Secretariat Jammu with immediate effect,  the broad details of its mechanism shall be published in leading News Papers of Jammu very shortly.