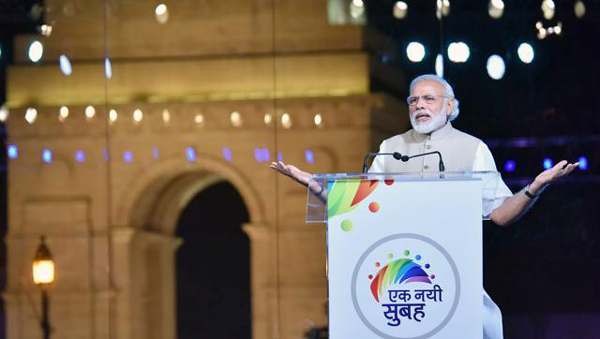 The BJP-led union government may have attacked the Aam Aadmi Party (AAP) government in Delhi for its spending on advertisements, but it spent more than Rs 36 crore on publicity and advertisements for organising the one-day “Ek Nayi Subah” show in Delhi to mark two years of the National Democratic Alliance (NDA) government.

This information was revealed in response to an RTI query by a news agency.

The amount for the six-hour event in Delhi was spent on print and electronic media advertisements.

The RTI reply received from the Directorate of Advertising and Visual Publicity (DAVP), Ministry of Information and Broadcasting, revealed that the amount spent by the centre on publicity was Rs 36,64,88,085.

Prime Minister Narendra Modi-led NDA government had organised a gala event at India Gate on May 29 to mark its two years in office.

The expenditure incurred on advertisements in print media was Rs 35.59 crore while in the electronic media it was Rs 1.06 crore.

Meanwhile, another RTI reply received from Doordarshan Kendra revealed that the total expenditure incurred by it on the “Ek Nayi Subah” show was Rs 92 lakh.

The RTI reply revealed that the advertisements were given to all the leading national dailies apart from other English, Hindi and regional dailies across the country.

During the “Ek Nayi Subah” event, the central government showcased its achievements and Bollywood’s leading names, including Amitabh Bachchan, espoused social causes at the show which lasted over six hours.

The central government and ruling party had come down heavily on the AAP government in Delhi for spending what they said was a huge amount of public money on advertisements and publicity.

The Delhi government had allocated Rs 526 crore for publicity and information for the 2015-16 financial year. This allocation was later reduced to Rs 100 crore in the revised estimates.

The panel set up by the Information and Broadcasting Ministry on content regulation of government advertisements charged the AAP government with violating Supreme Court guidelines and had ordered it to “reimburse to the state exchequer” the entire amount that it had spent on its advertisements.

A Comptroller and Auditor General (CAG) report had stated that the AAP government’s expenditure on advertisement and publicity had gone up three times from the previous government’s Rs 25.25 crore in 2013-14 to Rs 81.23 crore in 2015-16.