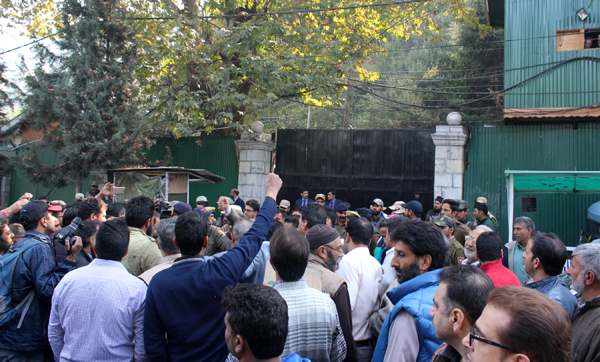 Asks Government to stop tormenting students and toying with their future

National Conference functionaries, legislators and activists on Wednesday held a protest demonstration outside Chief Minister Mehbooba Mufti’s residence at Gupkar and demanded “an immediate end to mass repression and indiscriminate arrests while decrying the Government’s vengeance against employees.”

The  party activists marched from National Conference Headquarters at Nawa-e-Subha Complex in Srinagar to the Chief Minister’s Gupkar Residence with placards expressing solidarity with families of slain youth, victimized civilians, employees and students. Speaking to reporters, National Conference General Secretary Ali Mohammad Sagar said the motive of the protest was to wake up the Chief Minister from her deep slumber despite the current unrest going past hundred days.

The NC General Secretary and Former Minister said the party stood in solidarity with the people of the State and would not allow the PDP-BJP alliance to wreak havoc on account of its opportunism and insensitivity.

“Despite nearly a hundred youth being killed and hundreds more maimed and blinded, the Chief Minister is still accusing the killed for getting killed and the blinded for questioning the injustice meted out to them. This Government has not even shown the bare minimum shame in acknowledging its utter and complete failure and has stooped to the level of brazenly defending the use of pellet guns in the court of law.

“The Chief Minister has left no opportunity to humiliate and denigrate the victims of the unrest by questioning their motives and attacking their intentions”, the NC General Secretary told media.