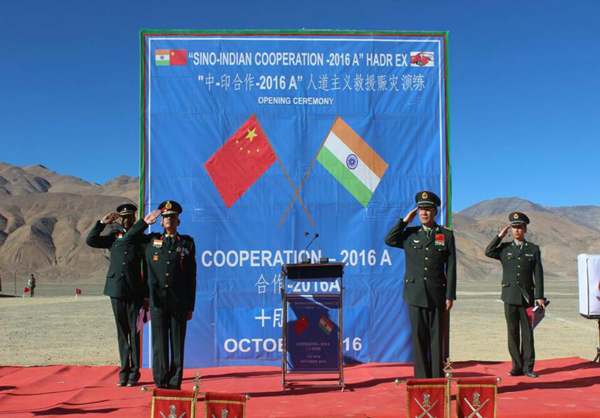 Despite not so warm relation between two countries the Indian and Chinese Army today held second Joint Tactical Exercise in Ladakh area.

According to the Defence Spokesman this was held , “As part of the ongoing initiative to enhance interaction and cooperation between India and China, under the provisions of Border Defence Cooperation Agreement, 2013, the Indian and Chinese armies held the second joint exercise ‘Sino India Cooperation 2016 A’ on 19 Oct 2016.”

This was a sequel to the first  exercise held on 06 Feb 2016. Soldiers of Chushul Garrision from India and of Moldo Garrision from China, participated in the exercise.

The Indian Team for the exercise was led by Brigadier RS Raman and that of the Chinese was led by Sr Col Fan Jun.  “The exercise was a great success and has not only refined the drills to provide succor to the border population in case of natural calamity but has also increased the level of trust and cooperation between the two border guarding forces along the LAC in Eastern Ladakh”, remarked the Spokesman

The joint exercise, compliments the Hand-in-Hand series of the India China joint exercises and the effort of both the nations to enhance cooperation and maintain peace and tranquility along the border areas of India and China.