Transporters protest against severe losses due to shutdown 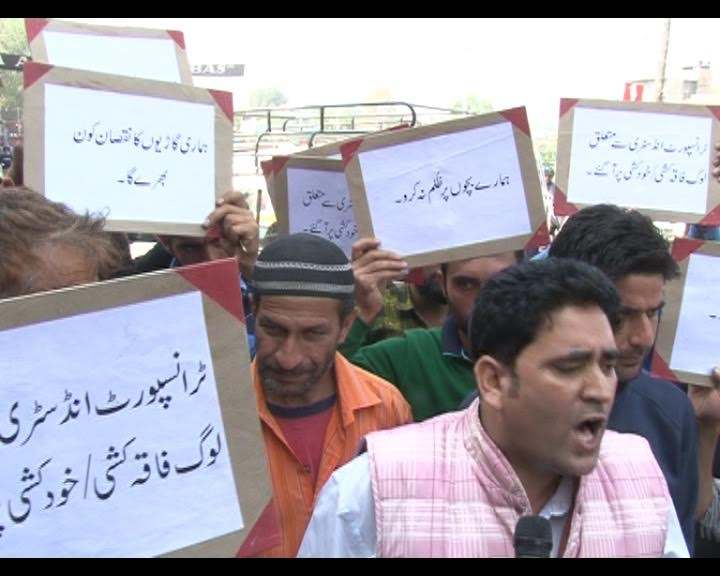 Transporters on Thursday staged protest against continuous strike calls given by Hurriyat Conference which “has badly their livelihood”, and they are unable to pay back the loan installments.

These transporters assembled at press colony and raised slogans against the protest calendar and appealed relaxation in the shut down. “From past three months we are sitting idle at home. We can’t earn owing to strike. Our livelihood is getting affected,” said a protester.

Transporters said they live from hand to mouth and that they were suffering starvation due to these continuous strikes.

Holding placards the protesters sat on a dharna in Press colony Srinagar and appealed leaders to call-off strike.  Protesters said they are even unable to feed their families as their “savings have now exhausted during past three months of strike”.  They added, “We are also unable to bear education expenses of our children and day to day household expenses; some of us even can’t afford for treatment of those ill at home,” protesters said.

The protesters said they have suffered huge losses owing to strike and no one is going to compensate their losses. Mohammad Shafi an owner of 2 Taxi Cabs said that “with no business the interest is accumulating and the private bank is not going to waive of interest in any case, this is an addition to livelihood crisis faced by us. We are badly trapped in a vicious cycle” 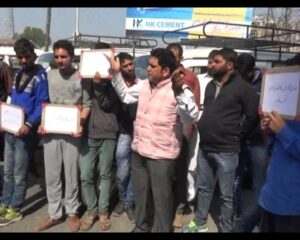 It is pertinent to mention here that more than 128 Tankers have been damaged by stone pelting in Kashmir valley in last two months and most of these commercial carriers were hired by Government Departments. Even oil tankers association had suspended supplies to Kashmir after repeated attacks on tankers. Official reports earlier stated more than 30 tankers hired by PHE department have been damaged in stone pelting which affected in some areas.

Bashir Ahmed, a resident of Kupwara and one among protestors said “Vehicles on contract with hotels, agencies, departments have been de-hired and we are even unable to sell the vehicle for loan payback. Mushtaq Ganai, making a point towards his Taxi Cab showed how it has been badly damaged in stone pelting.

More than 4500 commercial vehicles have been financed by various banks across Kashmir valley this fiscal which evidently could not earn a penny in last three months enabling loan paybacks which has become a major reason for protests of commercial vehicle owners and operators. A similar protest was registered in Kupawara a week earlier.

The protesters blocked the road near Lal Chowk for around two hours to register their protest against the prolonged shutdown. A large number of protesters had carried along their families including children and elderly.