Whisper India encourages girls to be unstoppable ‘like a girl’ 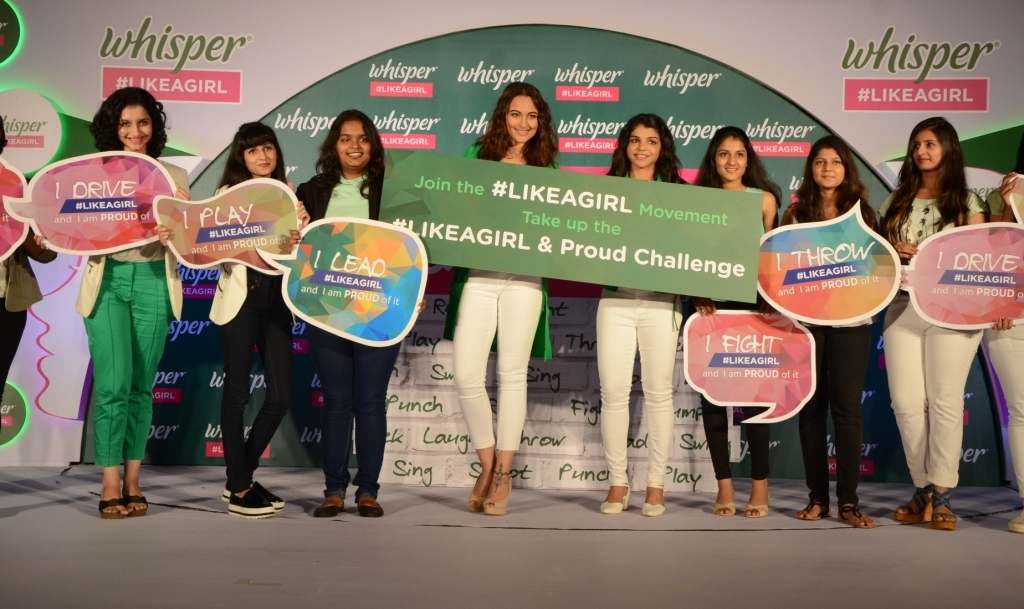 Jammu, September 26: Leading Feminine Care brand Whisper celebrated its #LikeAGirl campaign, now a nationwide movement, to reinforce the need to redefine the phrase ‘Like A Girl’. Recently, as part of the movement, Whisper released a moving video to empower girls to reclaim the phrase, and proudly continue doing things ‘Like A Girl’. In a bid to encourage girls in the country to be unstoppable, versatile actor –  Sonakshi Sinha and Rio Olympics Bronze Medalist, wrestler Sakshi Malik joined the movement and announced the #LikeAGirl & Proud Challenge. Whisper India has put out a challenge to all the girls in the country to take Pride and display how they Play, Fight, Run, Drive, Lead or Do Anything That They Love Proudly #LikeAGirl, everyday in their lives. Girls can take part in the challenge by sharing a short video or picture doing anything that they have been previously discouraged to do, only because they are girls.

Recent events have shown that the perception of the phrase Like A Girl is undergoing a positive change in India, such as the very heartening conversations about ‘They Fought Like A Girl’ or ‘They Played Like A Girl’ with reference to the female athletes who performed well at the Rio Olymppics. In fact, Bollywood Superstar Shah Rukh Khan’s self composed poem ‘Fight Like A Girl’ also went viral and touched the heart of millions of girls across the country. But there still seems to be a long way to go.

At the event hosted by youth icon and ex-roadie Bani J, Sonakshi Sinha and Sakshi Malik shed light upon some shocking revelations based on a survey recently conducted by Nielsen, in association with Whisper.

The results are from an independent survey conducted by Nielsen. The survey was conducted in Bangalore, Chennai, Delhi, Hyderabad, Kolkata and Mumbai with 1113 females aged between 14 – 24 years

On this occasion Bollywood actor Sonakshi Sinha said, “I have evolved professionally and personally. I want to be the best version of myself and so should every girl in the country. It’s important for every girl to understand that only our gender doesn’t and shouldn’t define who we are. It’s important that our society realizes this as well and that every girl is actively encouraged to do things she loves to do. My parents have always supported my decisions and haven’t pressurized me to not do certain things just because I am a girl. They have encouraged me to believe in the decisions I make and take responsibility. I’m glad to be part of Whisper’s Like A Girl movement and proud that such initiatives are being undertaken to encourage girls to be unstoppable and proud”.

The actress further added, “It is a matter of great pride for us as a country to see girls like Sakshi Malik represent India and achieve global recognition for Indian athletes. It’s a testament that fighting #LikeAGirl or playing #LikeAGirl is truly amazing.”

Talking about associating with the Like A Girl Movement, Sakshi Malik, said, “I don’t believe that girls can’t fight as hard as boys, as strong as boys and as confidently as boys. Yes, we are built differently – but we can always be as strong as we want me. When I started wrestling, it was never a “girls” sport – only the boys played and they said, “how should a girl wrestle? Why should a girl wrestle?” But I did not listen and aren’t you happy I did not? Because now we have a female wrestling medal.  Wrestling is my largest love and when you love wrestling the way I do, what they say is never important – it’s just a single minded focus to keep going, keep training and doing what you love to do! Falling deeper in love with it everyday. We as women need to continue playing and striving to win, and puberty is the last thing that should stop us, because along the way there are so many other obstacles that could stop us and we did not stop!  I played and fought #LikeAGirl, and am proud to see young girls and women are inspired by my win at the Olympics. It is truly fantastic to be part of Whisper’s Like A Girl movement and play a part in redefining the phrase like a girl into a positive affirmation, because “girl” is never an insult.”

For over 30 years, Whisper has been an advocate for empowering girls, bringing puberty education to millions of adolescent girls across the world. Every year in India, more than 4 Million girls benefit from the ‘Whisper School Contact Puberty Education Program. This year, through the ‘Like A Girl’ movement, Whisper has taken that commitment a step further to champion girls’ confidence. The #LikeAGirl video https://youtu.be/tIMOPLQbg94 has received an overwhelming response on social media and has engaged girls across the country who are sharing their stories of breaking stereotypes and negative perceptions of #LikeAGirl.