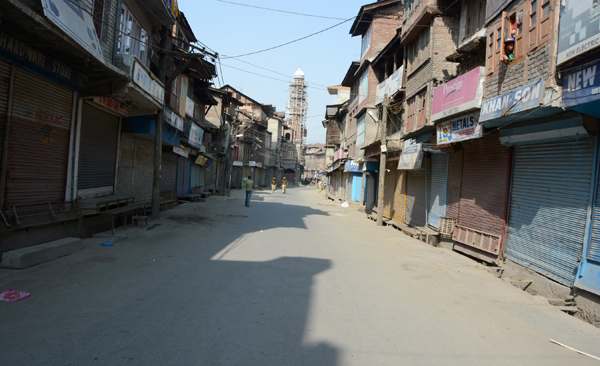 As unrest enters 116th day, Kashmir Valley is observing a shutdown on Tuesday with considerable movement of pedestrians and motorists on roads while rest was closed in summer capital and other townships of the region.

Almost all the shops, commercial establishments, petrol pumps and educational institutes are closed in all the areas of Valley. The public transport continues to remain off the roads but large numbers of private vehicles including passenger cab are plying in civil lines areas of city and on inter-district roads.

The five police station areas of old City in Srinagar continue to remain under thick security blanket to prevent stone-throwing clashes and demonstrations. Hundreds of police and paramilitary men are deployed in these areas. There is thin movement of pedestrians and private vehicles in Old City areas.

The shutdown is also being reported from all other districts of the Valley. Pulwama district, which witnessed violence between pro-militant protesters and security forces yesterday, is tense today with large number of police and paramilitary men deployed to thwart any kind of protest. Barring an anti-government protest at Rohmoo village, situation remained peaceful in the district.

Police said the situation was peaceful throughout the day.