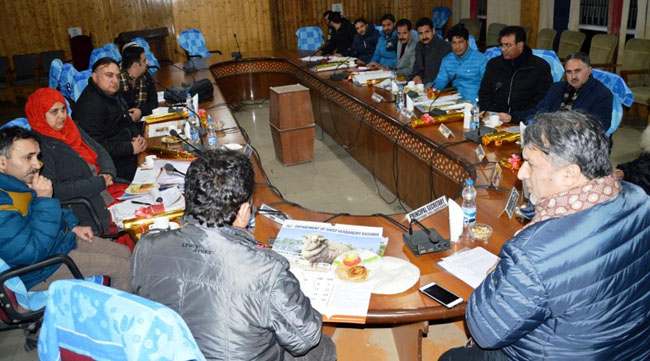 Seeking details regarding the Khimber project, the Director Sheep Husbandry Dr Mehraj ud Din informed the Principal Secretary about the status of establishment of Sheep Breeding Farm project at Khimber both in terms of funding by NABARD and issuing of NOC’s by allied departments.

Dr. Samoon took up the issues with NABARD regarding the funding of the project and directed them to release the first installment of the funds at an earliest and ensure that the next two installments are also released at appropriate time so that the project is completed well in time.

The Principal Secretary asked Secretary Lakes and Waterways Development Authority to issue NOC regarding the fencing of the Sheep Breeding Farm and directed Chief Engineer R&B and the concerned Executive Engineer to accelerate the works forthwith so that the said farm is made operational well in time.

The meeting discussed the operationalisation of SRTC complex at Tourist Reception Center by the government.

Seeking details regarding the SRTC Complex, the Principal Secretary was informed that  earlier the work on this complex had got stopped due to construction of Tehzeb Mahal at the site but now government has cancelled that project and SRTC has once again taken it back in its own possession to restart the work.

The meeting was also informed that Indian Oil Corporation has readily accepted to fund the construction costs of the complex.

The Principal Secretary sought details from RTO Kashmir regarding the condemning of old private vehicles that comprise of city transportation to put check on increasing pollution levels.

Dr. Samoon said that the capital subsidy to the tune of Rs. Five lac will be provided to owners of 200 such vehicles for purchasing new vehicles.

Dr. Samoon appreciated the department for the initiative and asked the officers to share their experiences and skills to boost the rearing of livestock on modern and scientific lines.