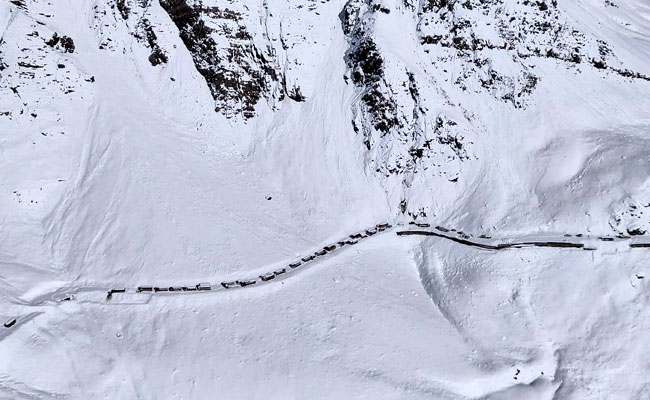 Mukhtiar Ahmed from the mountainous Rajouri district in Jammu province, who drives a Hindustan Petroleum gas tanker and is stranded on the Jammu-Srinagar highway, had to mortgage documents of his vehicle to borrow Rs 5,000 to buy food for himself.

Ahmad said he ran short of money which forced him to mortgage his vehicle documents with a local workshop owner.

“Usually we (truckers) keep with us Rs 3000 to Rs 4000 for our one-side journey which we hope to complete in a maximum of five days during snowfall in winters. But I am stuck in Ramban for the past three days. From Jammu, I couldn’t reach Ramban in 10 preceding days due to repeated halts by traffic officials at Jammu, Nagrota, Jakhaini, Bali Nallah and Patnitop,” Ahmed said, asserting that none of the stranded truckers is yet sure when the road, which remains closed for the past six days, will be re-opened.

“Since I had expended the entire amount I was carrying along, I mortgaged my truck documents with the workshop owner to get a loan of Rs 5000,” he said.

Ahmed is not the lone victim of what he calls “official apathy, which is visible all along the highway”.

Vinod Sharma from Jourian area in Akhnoor district, who drives a petrol tanker and has the responsibility to take the supply to Tangdhar (Kupwara), said he is stranded on the highway for the past 12 days.

“I am running short of money and left with no option than to borrow some money from my colleagues. People of Ramban have larger hearts as they are accommodating us and providing us all possible support in these trying times,” Sharma said.

Muhammad Saleem, who carries in his truck sheep and goats to be transported to Srinagar, said the cattle are dying of starvation.

“Initially, some locals provided the livestock with twigs of green leaves and grains but since there are thousands of animals and birds loaded in vehicles, even people are running short of stock to provide such a help continuously. These animals are dying,” he said.

Javaid Khan, another driver carrying vegetables in his vehicle, said: “My truck is stinking with bad smell as vegetables have perished due to seeping waters. I cannot even unload the supply because I have to show the stock to the person for whom I am taking the consignment in Kashmir”.

Around 3000 vehicles are stranded between Jammu and Srinagar due to closure of the highway following series of landslides at Peeda, Sherbibi, Digdol, Maroog, Anokhi Fall, Panthyal, Nashri, KhooniNallah and Gangroo areas, since Wednesday.

According to rough estimates, around 1500 trucks carrying essential supplies including ration, 300 oil tankers, 100 load carriers loaded with vegetables and fruits, and as many gas tankers, 300 vehicles carrying sheep, goats and chicken and 700 light motor vehicles are stranded at various locations.

With little hopes of any government help coming in anytime soon, the stranded passengers at Maroog say they have started descending down the two-km-long treacherous and risky hillock, cross a rivulet, ascend another one-km-long hill upwards, to ultimately reach the other side of the rivulet for their onward journey.

“On Monday alone, around 500 people risked their lives to reach the other side of the rivulet,” a local resident, Muhammad Ayoub, said.

Two non-state residents, including an assistant accounts officer (AAO), died on February 7 while crossing a landslide-prone area at Maroog, an official said.

Since then, while authorities have imposed restrictions on crossing the landslide-prone areas by foot, people continue to risk their lives to reach the other side of the rivulet.

Greater Kashmir Monday talked to some officials to find out why there has been an increase in landslide-prone areas along the Jammu-Srinagar highway.

One of the officials, who wished not to be named as he wasn’t authorised to talk to media, said, “There is a proper process to excavate hills for road construction works, but this procedure is not being followed by private contractors who have sublet the highway expansion works. Due to this, more areas in Ramban and Banihal have become landslide-prone”.

Earlier, only Nashri, Peeda, Panthyal, KhooniNallah and Battery Chashma were known for landslides and shooting stones but due to ill-planned excavation of hills by the contractors, Maroog, Sherbibi, Digdol and Gangroo areas have also become “risky”, the official said.

There are mere three shelter sheds along the highway in Banihal town (at Nougam, Tethar and GundAdalkot) and five at Digdol, Peerah, Bowli Bazar, Raghunath temple and government higher secondary school, Lower Maitra, in Ramban town, for the stranded passengers.

According to stranded passengers putting up there right now, there are no facilities like food, LPG, utensils, blankets, beds, heating, cooks, in Banihal sheds, while in Ramban sheds, except for beds and blankets, the passengers are not provided with any other facility.

On an average, 300 people stay in Banihal passenger sheds and around 250 in Ramban sheds.

According to many passengers, usually it is the security forces who occupy the Digdol and Peerah passenger sheds, while there is a dire need of such facilities at isolated areas including Maroog, Ramsoo, Battery Chashma and Anokhi Fall.

‘LOCAL RESIDENTS CAME TO OUR RESCUE’

The stranded passengers said those carrying enough money with them are staying in local hotels while those running short of money are being accommodated and provided with cooked food by local residents.

Shafkat Ahmed, a Srinagar-based shopkeeper, who is stuck at Banihal town, said for the past three days, he ate food at hotels and stayed in his vehicle. Later, locals offered me accommodation and food, he said.