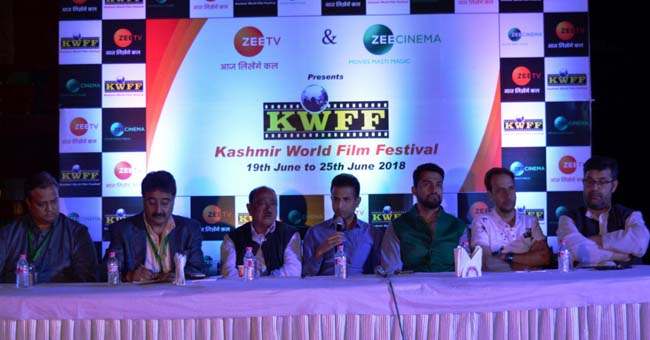 The celebrities who have been locked for the festival include Tanishaa Mukerji, Rajit Kapur, Imran Khan, Raj Bhansal, Komal Nahta, Gauhar Raza, Mir Sarwar and others. The delegates are coming from the places like Mumbai, Delhi, Kolkata, Trivandrum, Jaipur, Chandigarh, Jammu and others.

Festival Director, Mushtaaque Ali Ahmad Khan said that the preparations for the festival are going on in full swing. “All the people connected with the Kashmir World Film Festival are working day and night to complete the preparation for its 3rd edition on time,” he said.

However, the films celebrities have expressed high spirits for organizing this film festival. “I have been associated with this festival since the first edition and I will always be there. To make this festival a huge success, we need the support from so many quarters. I am very positive about the future of the festival and it has to go a long way. I see a bright future for KWFF,” said Rajit Kapur, an actor and a director.

Komal Nahta, a Bollywood trade analyst who will be visiting the valley for the first time says, “I’m excited for two main reasons – one, anything that is Films catches my fancy, and this is an entire film festival; secondly, the venue is Kashmir which, when I used to study in school, used to be referred to as ‘swarg ka kona’ ! I’ve never been to Kashmir and this festival gives me an opportunity to be there. I’m sure, festival director Mr. Mushtaaque Ali Ahmad Khan and his team must be putting together a fantastic festival”

“It is very courageous step taken by the organizers. This film festival and the similar other festivals are the need of an hour in Kashmir. I wish this festival such a success where the international filmmakers would aspire to join it,” said Gauhar Raza, a poet and filmmaker.

“KWFF is one unique film festival, which truly gives the opportunity to the youth of Kashmir to showcase their talent and culture through art and cinema. Kashmir has abundance of raw talent which hasn’t been explored yet and I sincerely hope that our joint effort in association with KWFF gives Kashmir the global exposure and the platform to help the youth to bring out their hidden talent. I feel very privileged to be a part of this festival,” said Raj Bansal, a leading film distributor from Jaipur.

Ashok Kaul, a filmmaker from Mumbai said, “I have full faith that the KWFF will unleash the enormous talent of our youth across all the regions of our state. I congratulate the team KWFF who has worked very hard to create a beautiful horizon and hope for all the talented youth of our state through this festival”.

Bollywood actor of Kashmiri origin, Mir Sarwar said, “KWFF is a wonderful platform for the budding filmmakers of Kashmir. The best thing about the festival is that the audience and students get to see some rare films, especially world class cinema which is not easily available to us. I have great hopes from this festival”

Khan said so far they have received more than hundred films for the screening. “But we will be screening only around 45 films in the seven day film festival,” he said.

The organizers have received the films from different countries that include Italy, USA, Iran, Korea, Poland, Turkey, Japan and Nepal. The films are of different languages as well that include English, Italian, Hindi, Kashmiri, Persian, Korean, Assamese, Punjabi, Nepali, Turkish, Marathi, Japanese, Malayalam and Sindhi.

Khan said that he wants to take this festival to top ten festivals of the world. “We want to make this festival a success and want it be recognized internationally,” he said adding that “the film celebrities will be interacting with the students and film freaks during the festival and will provide them a platform to understand the cinematic culture and how the Bollywood works”

He said that he is thankful to all those who have made this festival a success for the last one year that include students, film lovers and Bollywood celebrities.

“I express my heartiest gratitude to few prominent citizens of the valley who have been kind enough to accept our request to be the part of governing council of the film festival. Those prominent citizens are Mushtaq Chaya, Zahoor Tramboo, Tariq Rasheed Ghani, Riyaz Shahdad and MLA Rafiabad Yawar Mir and few others who are not leaving any stone unturned to take this festival to the new heights,” he said.