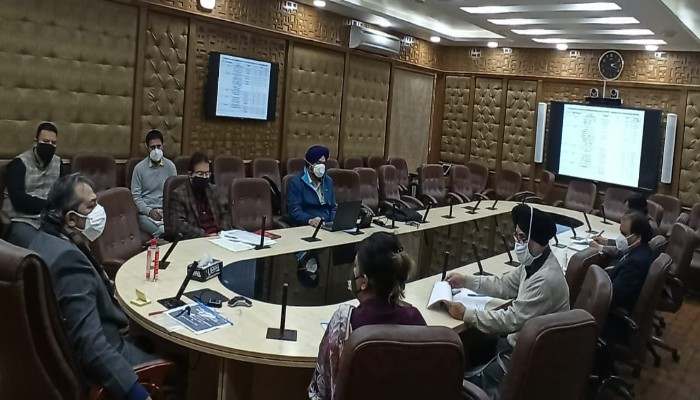 Threadbare deliberations were held on JPDCL preparedness for meeting power supply requirements during the winter season, particularly in the upper reaches of the Jammu division.

The Advisor took a detailed overview about the status of power distribution in Jammu, constraints, incidence of load on workshops, enforcement drives including the action plan of the JPDCL in overcoming these constraints.

The Advisor emphasised on the need for a foolproof mechanism to ensure that the upper reaches do not suffer power shortage during the winter season. He said that buffer stock of transformers and other material should be kept available for meeting the requirements in the upper reaches during winter.

Regarding the power theft, the Advisor directed the officers to intensify the drives in their respective areas to prevent power pilferage with squads in all districts. He also directed them to adhere to the curtailment schedule already announced so that public can take recourse measures.

To ensure prompt remedial measures on issues faced by the public, the Advisor directed them to get daily feedback from the field officers. He also asked them to complete the process of trimming of tree branches near power lines to prevent any damages.

The Advisor also said that the government’s endeavour is to strengthen the central workshops and directed for establishment of separate winter control room in upper reaches for meeting any eventuality during winter.

During the meeting, Chief Engineer, Distribution Jammu Gurmeet Singh gave a detailed presentation about the preparedness of JPDCL for winter season and informed that the inspection drives are going on in full swing.