All four convicts in Nirbhaya gangrape-murder case to be hanged on Jan 22 at 7 am in Tihar jail, orders Delhi court 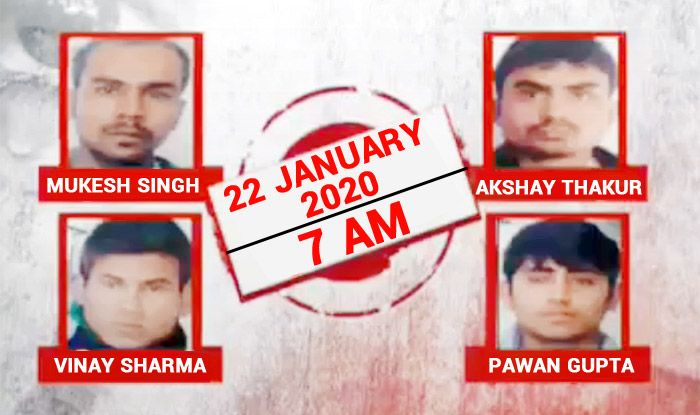 A Delhi court on Tuesday issued death warrants against all the four convicts in the Nirbhaya gangrape-murder case and ordered they be hanged on January 22 at 7 am in Tihar jail, over seven years after the brutal crime sparked outrage and anger across the country.

The death warrant, also known as black warrant, addressed to the office of the Tihar jail chief, was issued by Additional Sessions Judge Satish Kumar Arora against Mukesh (32), Pawan Gupta (25), Vinay Sharma (26) and Akshay Kumar Singh (31), all of whom are on death row.

“We have received the court order and will plan the execution of the four accordingly. Three of the accused are in Jail No. 2 and the fourth one is in Jail No. 4. Now they will be put in isolated cells and won’t be allowed to have any interaction with other prisoners,” Tihar jail sources said.

The sources said prison authorities in Uttar Pradesh will be approached to make available a hangman from Meerut to carry out the execution in Jail No. 3 in the biggest prison complex in Asia.

The sources said in all likelihood the four men will be hanged simultaneously amid reports that a new gallows frame is being readied for this purpose.

“Our team of doctors will conduct regular medical check-ups to keep a tab on their physical and mental health. We will also take care of their safety. Also, the families of the men can come and meet them during this period,” they said.

Nirbhaya’s mother Asha Devi was present in the court room in the Patiala House courts complex and became emotional during a brief media interaction.

“The hanging of the four convicts will restore the faith of women in law,” she said.

The court order was greeted with relief in Nirbhaya’s native village in Ballia in Uttar Pradesh.

Delhi Chief Minister Arvind Kejriwal said the issuance of death warrants against the convicts has fulfilled a long-term wish of the people of Delhi and hoped it would be a lesson for people who misbehave with women.

The order was pronounced on applications moved by Nirbhaya’s parents and the prosecution (Delhi government) seeking issuance of death warrants against the convicts.

The 23-year-old paramedic student, referred to as Nirbhaya or fearless, was gangraped and brutally assaulted on the intervening night of December 16-17, 2012 inside a moving bus in south Delhi by six persons before being thrown out on the road.

She died on December 29, 2012 at Mount Elizabeth Hospital in Singapore.

Ram Singh, one of the six accused, allegedly committed suicide in Tihar Jail. A juvenile, who was among the accused, was convicted by a juvenile justice board and was released from a reformation home after serving a three-year term.

The only legal remedy now left with the four convicts is to approach the Supreme Court with curative petitions to seek relief from the capital punishment.

The convicts can also avail the constitutional remedy of filing mercy pleas with the President.

Advocates for the convicts said they will soon approach the apex court with the curative petitions and will also seek a stay on the death warrants till the disposal of the curative plea.

A curative petition is the last legal recourse available to a person and it is generally considered in-chamber.

During the court hearing, the prosecution said there was no application pending before any court or the President right now by any of the convicts and the review petitions of all the convicts were dismissed by the Supreme Court.

While urging the court to issue the death warrants, the prosecution said, “In between issuance and execution of death warrants if the convicts want to file curative petitions they can do so.”

After the court reserved the order on issuance of death warrants, Mukesh’s mother entered the court room crying and urged the court to show mercy.

The court, however, refused to entertain her.

Talking to media persons outside the courtroom, Mukesh’s mother said her son was framed because of being poor.

Judge Arora interacted with all the convicts through video conferencing amid unconfirmed reports they broke down on hearing the news of the date of their hanging.

However, media personnel were not allowed inside the video conferencing room.

After the court passed the order, the lawyers and family members of the convicts came out and informed the media about the hanging date.

Nirbhaya’s father said they were satisfied with the order.

The trial court earlier directed Tihar jail authorities to seek within a week response from the four convicts as to whether they were filing mercy pleas against their executions with the President of India.

“Today, we have told the court that the jail authority had already given seven days time period to the convicts which lapsed last month,” a senior jail official said.

The Supreme Court on December 18 dismissed the plea of Akshay seeking review of its decision, saying review petition is not “re-hearing of appeal over and over again” and it had already considered the mitigating and aggravating circumstances while upholding the death penalty. The apex court earlier dismissed the review pleas of the other three convicts.

The top court in 2017 upheld the capital punishment awarded to the four men by the Delhi High Court and the trial court.