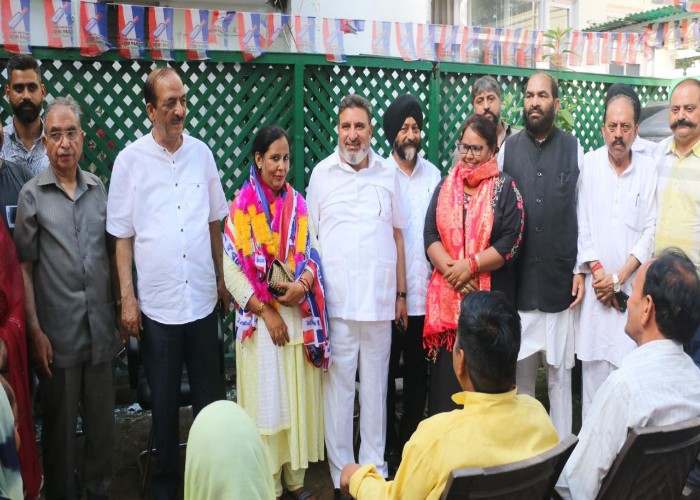 On this occasion, prominent among those who joined Apni Party include known social worker and head of Shiromani Santa Kabir Dass Trust, R.S. Pura with his hundreds of supporters are Santosh Bhagat, Veena Devi, Balak Ram, retired teacher, Anju, Tony, Toshi Devi, Rani Devi and others.

Welcoming them into the Party, Bukhari said that Apni Party is committed for the empowerment of the women folk in J&K without any discrimination.
He recalled the foundation of Apni Party on Women’s Day while referring to the importance given to the women in J&K with a motive to improve their livelihood and uplift them socially, economically, educationally and politically.

He said that “A large number of women are joining Apni Party in both the Regions as they were impressed with the policy and agenda of Apni Party as we are committed to give them a better life.”

He said that the Apni Party supports political reservation of women in the Legislative Assembly and in the Parliament so that they can work for themselves and improve their living standard and also protect their rights.

He said that the Apni Party is committed for the overall development and empowerment of the women folks.

He further informed that Apni Party is committed to enhance widow pension/old age pension up to Rs 5000 and also provide 4 cooking gas cylinders every year under the Ujala scheme.

He said that the Apni Party will continue its fight against the divisive forces. “We will not allow such elements who are creating division among the people. We will continue our struggle for the unity of Jammu and Kashmir. Those speaking for separate Statehood are trying to divert attention of the people from the real issues,” he added.

He said that “The people who want to create division on the name of region or religion are the enemy of peace and unity of Historic Dogra State of Jammu and Kashmir.”

He said that “Some elements are trying to fuel the situation in Jammu to get attention from the people. However, people are aware of such elements and this kind of aggressive politics will never succeed in creating division among the people and between the two Regions of J&K.”
He said that “The time has come when people should unite and do not give heed to the divisive elements. J&K has already faced a difficult situation and therefore, the Govt must stop speaking about further division of Jammu and Kashmir Regions.”