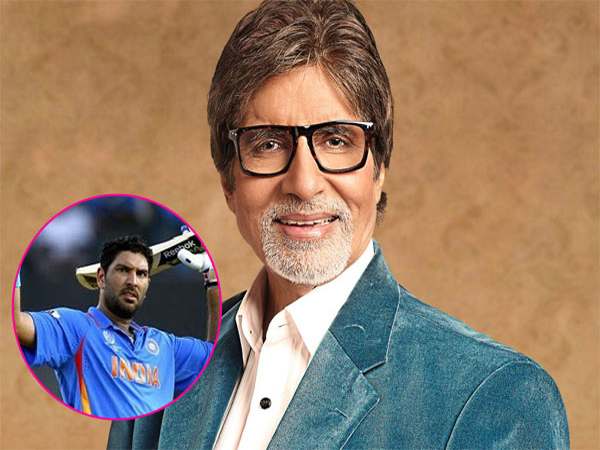 Megastar Amitabh Bachchan has praised star batsman Yuvraj Singh, calling him a “champion” after India’s ODI victory against England on Thursday. Amitabh on Thursday took to Twitter to praise the Punjab southpaw.”India thrash the British .. !! Yuvraj, it is the champion that disproves with his proof .. you were an exceptional Champion today (Thursday),” Big B tweeted.

The 74-year-old thespian also lauded the entire Indian cricket team “Indian vs England second ODI in Cuttack… you ‘cut’ the British with incredible ‘attack’! Exceptional feat…superlative dedication, and peace,” he tweeted. Singh blasted his career’s 14th One-day International ton in the second match against England at the Barabatti Stadium in Cuttack, which India clinched by 15 runs.

Returning to the national fold after a three-year hiatus, the 35-year-old’s belligerent century is his first since the 2011 World Cup, where he emerged the Man-of-the-Series. He along with former skipper Mahendra Singh Dhoni (106) forged a 256-run fourth wicket stand to drag India out of troubled waters after England removed the top three wickets for a meagre 25, to propel India to a mammoth 381/6 after their 50 overs.

Yuvraj (150) and Dhoni (134) displayed superb form with the bat to help India recover from a poor start and post and massive total of 381/6. In reply, England came up with a brave challenge spearhead by a century from Eoin Morgan to post 366/8 in their 50 overs.

India played only up to 75 per cent of their potential and still have scope for improvement despite a series-clinching 15-run win in the second One-Day International (ODI) match against England here on Thursday, skipper Virat Kohli said.

Kohli said he wasn’t sure how many runs India could post after being sent into bat and being reduced to 25/3. But he was glad Yuvraj and Dhoni added 256 runs for the fourth wicketin 38.2 overs to bring the Indian innings back on track after England pacer Chris Woakes had reduced the hosts to 25/3 by the fifth over. “We were wondering if we had a good start where we were going to end up. 25/3, scoring at four runs an over and ending up with 381 was incredible. I though 340 was par, 380 was far fetched though they got close going hard at the start and at the end. Bowling second was pretty difficult and I was wondering how it would have been had we chased this one,” he added.

The final match of the three-match series is in Kolkata on January 22.