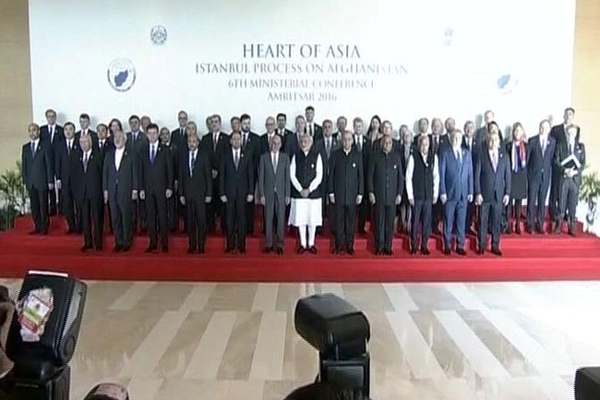 The Amritsar Declaration of the Heart of Asia Conference on Sunday   specifically named Lashkar-e-Toiba and Jaish-e-Mohammad terror groups active in Kashmir   as a threat to peace and the need to eliminate them. This is delight to the Indian diplomats who had been looking for the names of these Pakistan based groups to pin down Islamabad to further their charge that the neighbouring country is the university of terrorism from where it exports the men and machines of death and destruction to India and Afghanistan.

Pakistan’s foreign affairs advisor Sartaj Aziz might have thought that he has done  his job in sending out a message that it was too simplistic to blame one nation  ( Pakistan) for the whole trouble of terrorism, but  the world is aware that Pakistan  has emerged as a  reservoir of global terrorism .  There are no doubts about it .  This is not because what  Afghan President Ashraf Ghani  and  Indian Prime Minister Narendra Modi said about Pakistan  and its export of terrorism to its neighbhourhood , the fact is that Pakistan sponsored terrorism has been much of the problem  for Delhi and Kabul.

Normally, the declarations  don’t  mean  anything beyond the words and their relevance  for  a while before they fade into oblivion and turn meaningless. But this declaration at this time , when India and Afghanistan are outraged by the terror tools  – Taliban in Afghanistan , and  JeM and LeT in  India,  holds a major  significance from where Delhi and Kabul can build their case of greater fight against terrorism . The attendant factor is to isolate Pakistan , howsoever irreplaceable it may be in the geo-strategic  it may be  for the Western world and the emerging  super power China  and newly invented interest of  Russia in China- Pakistan Economic Corridor .

Jammu and Kashmir has taken the direct hit of  the situation in Afghanistan since  late 1980s, and Pakistan’s  designs on Kashmir since  1947 .  Therefore, India has a legitimate concern  over the increasing number of terror attacks in Afghanistan  and  Kashmir .  A destablised  Afghanistan and terror-exporting Pakistan  send shockwaves to India . It cannot remain immune  to the  factories of terrorism in Pakistan and Pakistan occupied Kashmir .

Rough estimates  are that more than 20,000 local and foreign militants have been killed in Kashmir  over  the past 26 years . The shape of the landscape in Kashmir has not changed . This  spurs a question , whether   fighting  Pakistan backed terrorism  or isolating it would serve the  larger objective of the real peace in  Kashmir .  This question is important , because of the psyche of Kashmiri Muslims have been filled with hate-India campaign , and all these are not  the men or women with guns in their hands . Secondly,  the hope that the isolation of Pakistan would  keep Jammu and Kashmir out of the reach of the trouble of terror , has another angle. Pakistan , if pushed to wall, would become another Somalia . A destablised Pakistan is  more dangerous for India  than a stablised one .

Of course, it is incumbent upon Pakistani establishment, dominated by its military, to  shut the factories of  terrorism  and it should also recognize the fact that  Kashmir ‘s territory or people, cannot be won over by terrorism or the petty games of  causing violent disturbances one  or the other excuse in the Valley . It was not the primary player in the current unrest, but it  let out 24×7 running inflammatory material pipes to flare  up the situation . And, those   who have chosen to give it a  no objection certificate  to it  are playing politics with Delhi for their own political objectives .

Pakistan’s consistent  complaint is that India is shying away from talks on Kashmir , and there are internal forces telling Delhi to engage  with Pakistan on Kashmir . Pakistan wants to dictate talks with terrorism as its bargaining chip . That cannot happen . India, should also realize that its stakes in peace in Kashmir are higher than that of any other country, therefore  an alternative to isolation  of Pakistan has to be found , for its own interests. Unless that is done the declarations would be  just  eye pleasing lines on paper for Delhi.