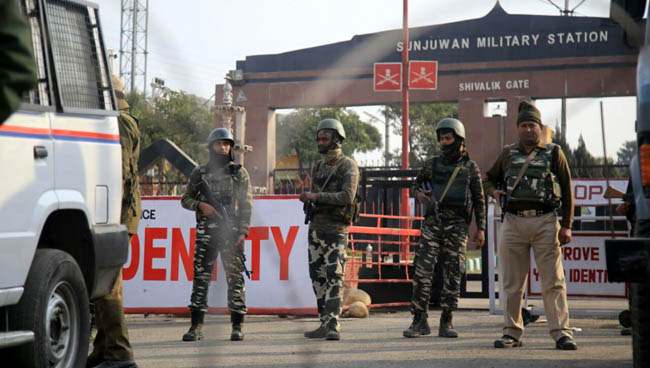 Essentially, the government wants these officers to put in their papers and retire. The officers will still be eligible to receive all the benefits that are due to them, a government officials said requesting anonymity.

Commanders who were in charge of the Uri brigade, the Sunjuwan military camp and the Nagrota army base in Jammu and Kashmir when their establishments were stormed by terrorists in past years may have “to go home”, the government has decided, seeking to take action against the senior leadership for security lapses that may have aided the attacks.

The government has communicated its recommendation to the Indian Army, a senior official in the security establishment said, requesting anonymity because he is not authorised to speak to the media.

Essentially, the government wants these officers to put in their papers and retire. The officers will still be eligible to receive all the benefits that are due to them, he added.

“The army was communicated that commanders should put in their papers days after the new government was sworn in,” said a second official in the security establishment, who also did not want to be named.

The decision comes less than a month after the Bharatiya Janata Party-led National Democratic Alliance (NDA) was sworn in for a second successive term in office after winning a commanding majority in the April-May general elections.

A total of 36 army personnel died in the three attacks, two of which — on the Uri brigade and the Nagrota base — took place in 2016, and the third — on the Sunjuwan camp — last year.

An Indian Army spokesperson did not comment on the government’s decision. “I have no information,” the spokesperson said in reply to a query by HT.

A group of terrorists sneaked into the Brigade Headquarters in Uri, killing 19 soldiers, on September 18, 2016. Seven soldiers, including an officer, died when terrorist stormed the 16 Corps Artillery Brigade located in Nagrota on November 29, 2016. Eleven soldiers were killed when terrorists attacked the Sunjuwan camp on February 10, 2018.

The Uri attack prompted the Indian Army to carry out cross-border “surgical strikes” on terrorist camps on 28 September, 2016, an action that sparked fears of war between India and Pakistan

Inquires by the Indian Army into the Uri attack revealed lapses, according to the first official. For instance, troops were housed in tents although safer shelters were available. Importantly, there had been prior information about a possible attack.

Similarly, inquiries into the attacks in Nagrota and Sunjuwan also revealed command and control lapses, the official said. For instance, a terrorist breached the security cordon in Nagrota and entered the camp but was not detected by multiple layers of security. A machine-gun mounted security post that came in the way of the terrorist allegedly offered no resistance.

Action against commanders is not a completely new proposal. During the NDA’s previous regime, then defence minister Nirmala Sitharaman had pushed for strong action in such cases. Prime Minister Narendra Modi had expressed his extreme displeasure over the attacks in conversations with the army and air force chiefs, a third government official said on condition of anonymity. The military, however, resisted, he added.

On its part, the government wants to hold senior leadership responsible for lapses that may have aided the terror attacks. After the Modi government came back to power last month, it revived the move for action against commanders under whose watch their establishments were attacked by terrorists, a fourth senior official who did not want to be named said.

The Indian Army is not keen to retire the commanders because of operational issues. “The attacks have been probed. Necessary steps have been initiated already, can action be initiated again?” a senior Indian Army officer, who did not want to be named, asked.

Interestingly, one of the base commanders had just assumed charge two days before the attack.

The military had resisted previous attempts by the government to initiate exemplary action against officers on grounds that any action, other than removal from command, against them could set a bad precedent and make future commanders engaged in counter-insurgency and counterterror (CICT) operations apprehensive.

“Being removed from command is disgraceful,” General Bipin Rawat, the army chief, had earlier said when asked whether the army was considering stricter action.

The army had also argued that punishing officers for terror attacks would lead to a “fortress mindset” at a time when militaries spend more energy protecting bases and minimising casualties rather than pursuing terrorists.

“If officers are punished for terrorists managing to carry out an attack, casualties of soldiers, the focus and tempo of counterterror operations in Jammu and Kashmir and the north-eastern states will have to change,” another senior army officer, who has served many years in Jammu and Kashmir, said.