ARMY PAYS TRIBUTE TO ITS MARTYR 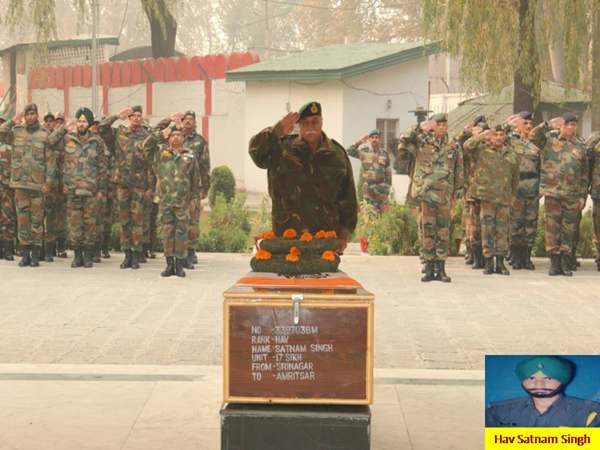 Army today paid befitting tributes to its valiant soldier Hav Satnam Singh who had attained martyrdom, on 09 Nov in Machil Sector, of Kupwara, North Kashmir.

Homage was paid to the “valour and sacrifice of the Late soldier in a solemn ceremony held at Badami Bagh Cantonment”.

Late Hav Satnam Singh had sustained a gun shot wound due to Pakistan sniping from across the Line of Control while he was deployed at a forward post in Machil sector. He was provided immediate first aid and evacuated from the post but unfortunately succumbed to the injuries.

Known for his high sense of duty and patriotism, he had also served earlier in the specialist counter terrorist force, Rashtriya Rifles.  The departed soldier hailing from Amritsar, Punjab is survived by his wife Smt Baljit Kaur and three young children.

Saluting the Brave soldier on his final journey, Lt Gen JS Sandhu, the Chinar Corps Commander said that every soldier, in his martyrdom, further inspires his comrades to thwart nefarious designs of the adversary.

The mortal remains of Hav Satnam singh will be flown for last rites to his native place where he will be laid to rest with full military honours.