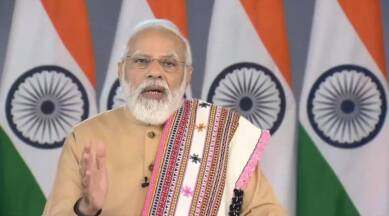 Participating at the Shanghai Cooperation Organisation summit, Prime Minister Narendra Modi on Friday said that the SCO member countries should grant rights to transit and improve connectivity. Modi’s reference was clearly to Pakistan, whose Prime Minister Shehbaz Sharif was present at the SCO leaders’ session.

The Prime Minister also flagged the impact on global supply chains due to the Covid-19 pandemic, and the energy and food security issues.

Chinese President Xi Jinping expressed support for India, which is going to assume the Presidency of the SCO and will host the summit next year.

At a time of global turbulence in the wake of Russia’s invasion of Ukraine and China’s aggressive posturing over Taiwan, Prime Minister Modi reached Samarkand in Uzbekistan Thursday night for the annual summit of the Shanghai Cooperation Organisation.

This is the first in-person SCO summit since the leaders gathered at Bishkek in Kyrgyzstan in June 2019.