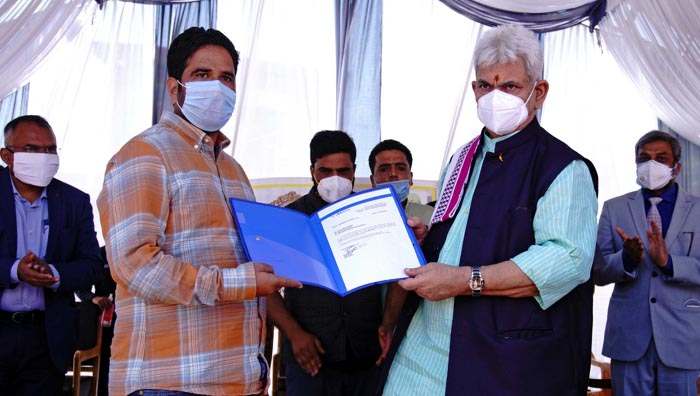 “Panchayats in J&K to be a new model of equitable development & growth in the country; people of J&K will decide their own priorities & administration will be facilitator”, Lt Governor

Two young aspiring entrepreneurs being identified from every Panchayat in J&K, more than 8000 youth to benefit

Soul of Back to Village lies with people’s participation; saturation of beneficiary-oriented schemes top priority

Will strictly monitor the time limit of projects; no undue delays will be tolerated: LG

“Panchayats in J&K to be a new model of equitable development and growth, where people will decide their own priorities and administration will be the facilitator. No hollow announcements, will deliver what I promise”, Lieutenant Governor, Manoj Sinha made these remarks during his visit to Nesbal, Bandipora on the second day of Back to Village-3 programme.

Delivering on the Promise of providing requisite handholding and assistance to at least two young educated aspiring entrepreneurs from every Panchayat in the Union Territory to realize their dreams, the Lt Governor presented loan assistance of Rs 5 lakhs each to two educated young aspiring entrepreneurs of Nesbal Halqa. More than 8000 youth will be benefitted from this initiative across J&K.

“I want the Socio-Economic growth of Jammu Kashmir to become an example, a benchmark, for other states of the country. It is my promise, and I will work day and night to ensure that J&K very soon becomes a shining example of equitable growth”, the Lt Governor maintained.

He said that the farmers, artisans, labourers, start-ups, entrepreneurs, everyone to benefit from the ongoing and upcoming schemes. People will get services at doorsteps; grievance redressal and on-spot delivery of public services is going to be institutionalized, while timelines of projects will be strictly monitored and no undue delays will be tolerated.

On the occasion, the Lt Governor launched all phases of the Panchayat Development Index including the dashboard. The index shall rank 151 panchayats. He also launched Revenue Court Management Portal and Mobile App (Meezan).

Meanwhile, the Lt Governor inaugurated the Upgraded road from Dharma Hama to Guzarbal (1.60 kms) worth Rs 148.98 lakhs and laid the foundation stone of the Construction of new building for One Stop Centre, Bandipora costing Rs 48.00 lakhs.

While addressing a gathering of enthusiastic locals, the Lt Governor observed that the soul of Back to Village lies with people’s participation. B2V is not merely a demand-delivery mechanism but a new development model; a mechanism to designate funds, functions, functionaries to the grassroots.

On youth welfare and empowerment, the Lt Governor underlined the need to change the narrative. “Proper opportunity to youth in sports, education, entrepreneurship, employment, and other fields will certainly open the door of development”, he added.

During the visit, the Lt Governor said that fruit production and allied activities including building storage facilities would be encouraged and accentuated in the region.

‘Works on four power stations are underway, which once completed, would greatly alleviate the power issues of the district. Similarly, directions have been passed to expedite 80 important projects and complete them in a time-bound manner’, remarked the Lt Governor.

The Lt Governor observed that many works from earlier phases of Back to Village have either completed or are on the verge of completion. Sufficient review of the earlier phases and the observations have been considered while planning B2V3 to make it the best of the three.54 schemes and funds to the tune of Rs 2.5 crore per district and Rs 10 lakh per Panchayat has been earmarked to be delivered during the B2V3. Only the village should decide their priorities and works requiring immediate attention.

Speaking on the world-famous Wular Lake of the district, the Lt Governor said that experts have been consulted for the conservation and sustainability of the lake. ‘Financial and technical aspects of the project are about to be finalized and the work on it is to be started very soon to rejuvenate this world-famous tourist attraction’, he said.

On the overall development of J&K, the Lt Governor said that the government intends to route funds under various schemes to be utilized in consultation with panchayats to ensure that villages of J&K lead in quality of living, education, health, employment, and with respect to business growth indicators in the entire nation.

The Lt Governor said that a massive economic package has already been sanctioned for relief & revival of the business sector in J&K. The ill effects of COVID are being mitigated gradually and sincere efforts are being put to revitalize the incomplete projects to finish them at the earliest. The upcoming Industrial Policy, which will be among the best in the country, is also going to be announced soon which would significantly change the villages of J&K.

Deputy Commissioner, Bandipora briefed the Lt Governor about the developmental indicators of the District. He informed that the first rural BPO of J&K has been established at Bandipora in February 2019.

While apprising the Lt Governor about the achievements being made during Jan Abhiyan, he informed that 100 % saturation of KCC has been achieved in the district with 53,499 registered farmers given benefits of KCC; around 1,06,000 Domicile Certificates were issued during Jan Abhiyan through Panchayat wise camps; Aadhaar seeding of 91% Ration Cards in the district was completed; 27000 students were given benefits of scholarships; 100% saturation as per target achieved for the old-age pension and widow pension and 30 km of road length macadamized during the last 20 days with a total 120 km macadamized so far this year.