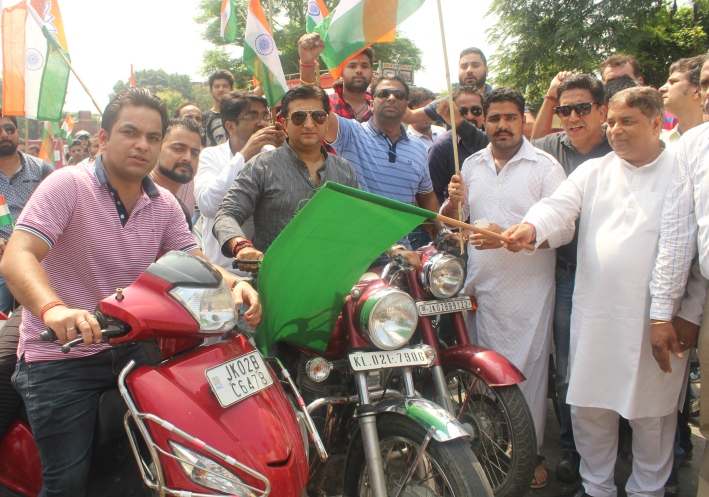 In order to celebrate 70 years of Independence under the banner of “Azaadi 70” & “Yaad Karo Qurbani”, Bharatiya Janata Yuva Morcha organized a Bike Rally which was flagged off by state president BJP and MLA Jammu West Sat Sharma.

The Rally started from Maheshpura Chowk and passing through various areas of Jammu West including Bakshi Nagar, Canal Road, Krishna Nagar, Talab Tillo and other areas, the rally culminated at Patta Bohri Chowk. A large number of youth activists took part in the rally and showed their enthusiasm for their motherland. The program was organized under the leadership of Talab Tillo Mandal President Atul Bakshi.

Addressing the youth activists Sat Sharma said that true inspirations for youth like Bhagat Singh, Chandershekhar Azad and many others sacrificed themselves for their nation and it is the youth who has to carry the legacy and must involve themselves in things which should take our nation to new heights.

He said that even Prime Minister Narendra Modi also focus upon youth in majority of his speeches as the youth is considered to be the back bone of the nation and tomorrow belongs to them.