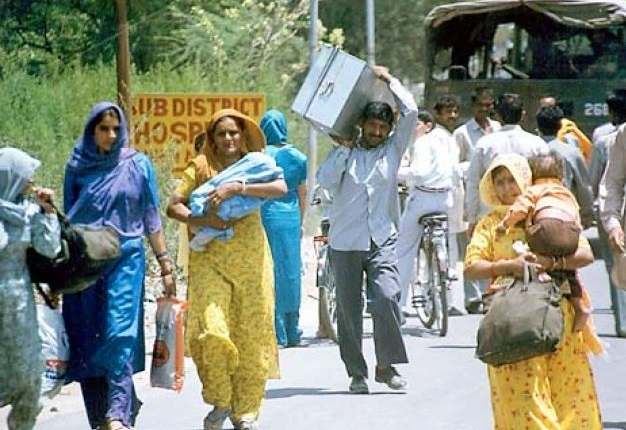 Jammu,  October 1   The Jammu and Kashmir government is harassing the border residents all across  the state , forcing them to leave their homes but has no alternate arrangement in place for thousands of them.

This kind of insensitivity is unheard of, particularly in the Jammu plains where the border  villagers have been asked to leave their homes as they could come under attack from shelling and fire from across the border. But, when the villagers demand to know, where to go, the standard  answer fed to them by the insensitive regime  is , “ we don’t know. Go anywhere but don’t stay here in your homes. This is  double whammy for us,” said Gajinder Singh of Bambla village near Kathua .

He told the JKNT that the officials have  visiting their places and neighbhorhood and asking “ us to move out”, but they have not made any arrangement for our stay, food or shelter.” Any question, he said is rebuffed with  rune behavior . “ We are made to feel as if we are animals who can be herded to any direction,” Vidaya Devi , a middle aged lady of the village said.

The government had ordered  last evening the vacation  of the border villages on Thursday after it was apprehended that the surgical strikes by the Indian army at the terrorist camps in Pakistan occupied Kashmir  could evoke retaliation by Pakistani army. The Pakistani army is known for shelling the civilians and killing them.

Border areas in Jammu and Kashmir have been quite vulnerable to such  attacks on the  civilians.  Unable to face the Indian army , the Pakistani and Rangers  fire mortar shells and heavy  gun fire on to civilians.  Hundreds of civilians were killed in 1990s and also  in the starting years of 21st century.