BREAKING NEWS The Nobel Prize in Physics has been awarded to three scientists. 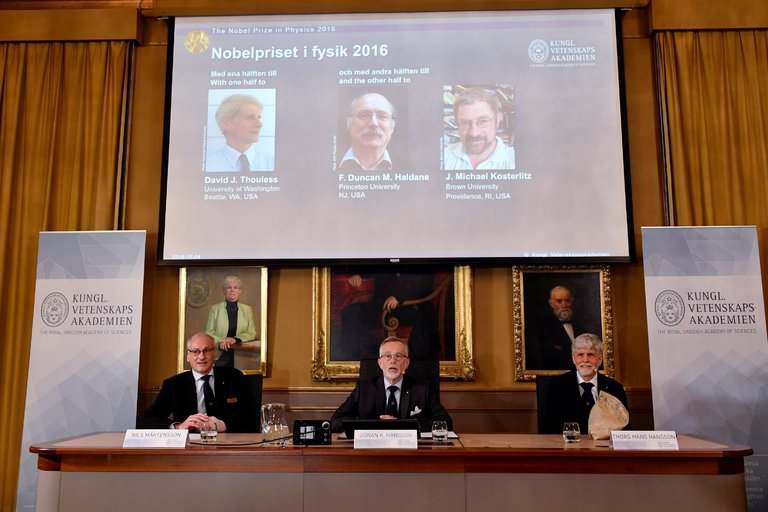 David J. Thouless, F. Duncan M. Haldane and J. Michael Kosterlitz wereawarded the Nobel Prize in Physics on Tuesday for discoveries in condensed-matter physics that have transformed the understanding of matter that assumes strange shapes. All three were born in Britain but work in the United States.

Using advanced mathematical models, the three scientists studied unusual phases, or states, of matter, such as superconductors, superfluids or thin magnetic films. Their findings have relevance for materials science and electronics.

Topology is a branch of mathematics that describes properties that change only in increments. In the early 1970s, Dr. Kosterlitz and Dr. Thouless “demonstrated that superconductivity could occur at low temperatures and also explained the mechanism, phase transition, that makes superconductivity disappear at higher temperatures,” the academy found.

In the 1980s, Dr. Thouless showed that the integers by which the conductivity of electricity could be measured were topological in their nature. Around that time, Dr. Haldane discovered how topological concepts could be used to understand the properties of chains of small magnets found in some materials.

“We now know of many topological phases, not only in thin layers and threads, but also in ordinary three-dimensional materials,” the academy said. “Over the last decade, this area has boosted front-line research in condensed matter physics, not least because of the hope that topological materials could be used in new generations of electronics and superconductors, or in future quantum computers.”

Dr. Thouless was awarded half of the prize of 8 million Swedish kronor, or about $930,000, while Dr. Haldane and Dr. Kosterlitz will share the other half.

Dr. Thouless, 82, was born in Bearsden, Scotland, was an undergraduate atCambridge University and received a Ph.D. in 1958 from Cornell. He taught mathematical physics at the University of Birmingham in England from 1965 to 1978, where he collaborated with Dr. Kosterlitz. He joined the University of Washington in Seattle in 1980, where he is now an emeritus professor.

Dr. Haldane, 65, was born in London. He received his Ph.D. from Cambridge, where he was also an undergraduate, in 1978. He worked at the Institut Laue-Langevin in Grenoble, France, the University of Southern California, Bell Laboratories and the University of California, San Diego, before joining Princeton in 1990.

Dr. Kosterlitz, was born in 1942 in Aberdeen, Scotland, and received his doctorate in high energy physics from Oxford University in 1969. He has worked at the University of Birmingham; at the Instituto di Fisica Teorica in Turin, Italy; and Cornell, Princeton, Bell Laboratories and Harvard.