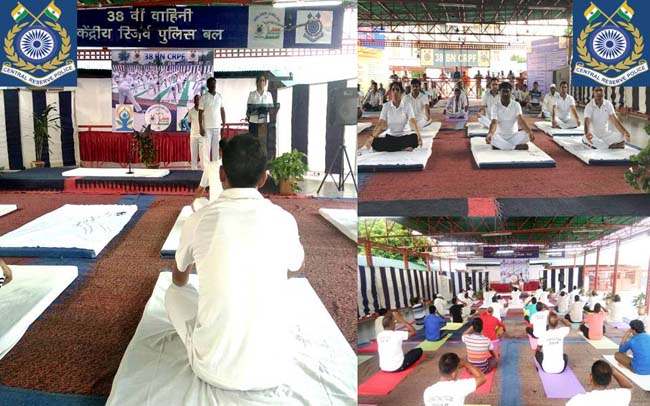 Shri Amarnath Ji Yatra 2018 is going on since 28.06.18 and CRPF is playing a major role in its smooth conduct.  The responsibility of security of Bhagwati Nagar base camp in Jammu is entrusted upon 38 Bn CRPF upto large extent.  Besides, CRPF is also assisting pilgrims on various aspects such as medical and information on various relevant issues. With the similar objective, 38 Bn CRPF organized Yoga session for Shri Amarnath Ji pilgrims at Base Camp, Bhagwati Nagar, Jammu on 31/07/2018.

Chief Guest of the session, Smt Nitu DIG CRPF Jammu Range, shared with the pilgrims the importance of Yoga in our day-to-day life. She also reiterated the commitment of CRPF with such programs. She also mentioned that Hon’ble Prime Minister of India has also been emphasizing upon the need of yoga to keep people physically fit and mentally agile. The pilgrims appreciated the role being played by CRPF in service to the nation.