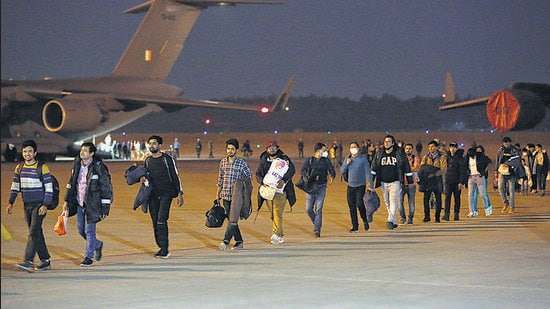 Undergraduate medical students evacuated from war-torn Ukraine cannot be accommodated in Indian colleges since there is no regulation allowing such transfers , apart from these being unfair to local candidates who could not make it to these colleges due to poor scores, the Union government told the Supreme Court on Thursday.

Submitting its affidavit before the bench of justices Hemant Gupta and Sudhanshu Dhulia, the Union health ministry pointed out that there are no provisions allowing such transfers either under the Indian Medical Council Act, 1956 or the National Medical Commission Act, 2019.

“Till now, no permission has been given by NMC (National Medical Commission) to transfer or accommodate any foreign medical students in any Indian medical institute/university,” stated the affidavit, which was filed in response to a bunch of petitions by undergraduate medical students who returned from Ukraine due to the Russian invasion of the European country, seeking accommodation in Indian colleges and universities to complete their education.

“Till now, no permission has been given by NMC (National Medical Commission) to transfer or accommodate any foreign medical students in any Indian medical institute/university,” stated the affidavit, which was filed in response to a bunch of petitions by undergraduate medical students who returned from Ukraine due to the Russian invasion of the European country, seeking accommodation in Indian colleges and universities to complete their education.

The government also clarified that “academic mobility programme”, as approved by NMC through its September 6 circular, does not include Indian universities and is limited to allowing the students from war-torn Ukraine to complete their education in other countries.

“In the Public Notice dated September 6, 2022, the phrase ‘global mobility’ cannot be interpreted to mean accommodation of these students in Indian colleges/universities, as the extant regulations in India do not permit migration of students from foreign universities to India. The aforesaid Public Notice cannot be used as a back door entry into Indian colleges/universities offering UG (undergraduate) courses,” stated the affidavit.

On the aspect of equity, the Centre submitted that most of the students before the court went to Ukraine either due to poor scores in the National Eligibility Entrance Test (NEET) Exam or because of less expensive medical education in Ukraine.

“It is humbly submitted that in case these students with poor merit are allowed admission in premier medical colleges in India, by default, there may be several litigations from those desirous candidates who could not get seats in these colleges and have taken admission in either lesser-known colleges or have been deprived of a seat in medical colleges. Further, in case of affordability, if these candidates are allocated private medical colleges in India, they once again may not be able to afford the fees structure of the concerned institution,” it added.

The affidavit emphasised that the government and NMC have already taken appropriate steps by allowing academic mobility programme and also letting medical students from Ukraine and China, who had completed their course before June 30, 2022, but were unable to complete their internship, to appear in the Foreign Medical Graduate Exam (FMGE), which is a screening test that foreign medical students have to clear to practice in India.

“Any further relaxation in the regard, including the prayer seeking transfer of these returnee students to medical colleges in India would not only be dehors the provisions of Indian Medical Council Act, 1956 and the National Medical Commission Act, 2019 as well as the regulations made thereunder, but would also seriously hamper the standards of medical education in the country,” said the Centre.

The top court will take up the clutch of petitions, filed through advocate Vineet Bhagat, Ashwarya Sinha and Prashant Padmanabhan, among others, on Friday.

On August 26, the Supreme Court bench sought the Centre’s stand on the issue, referring to a report prepared by the Parliamentary Committee on External Affairs. This report, submitted to Parliament on August 3, recommended that Indian students, who had returned from Ukraine following the ongoing war with Russia, should be allowed to complete their medical courses in the country.

On that day, senior advocate R Basant, appearing for one of the petitioners, claimed that in all, 20,000 students were affected.