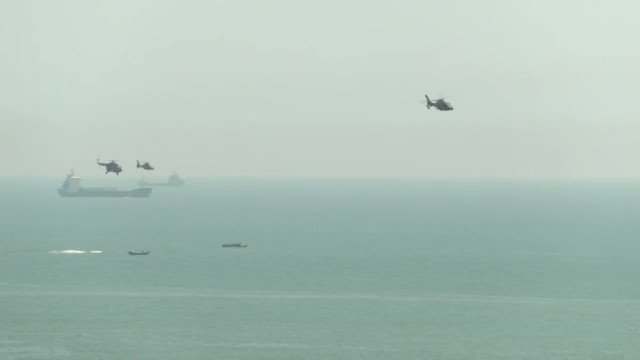 Hours after China’s People’s Liberation Army (PLA) began its “largest-ever” military exercises including live firing on the waters and in the airspace surrounding the island of Taiwan, China said it conducted “precision missile strikes” in the Taiwan Strait on Thursday. The military exercises by China have raised tensions in the region to their highest level in decades.

The drills come a day after US House Speaker Nancy Pelosi visited Taiwan amid threats by China over the decision.

Reacting to the development, Taiwan officials have said the drills violate United Nations rules, invade Taiwan’s territorial space and are a direct challenge to free air and sea navigation. “China is conducting drills on the busiest international waterways and aviation routes and that is ‘irresponsible, illegitimate behaviour’,” Reuters quoted Taiwan’s ruling Democratic Progressive Party as saying.

The live-fire drills and other exercises around Taiwan will end at 12:00 p.m. (0400 GMT) on Sunday, according to state television.

“Six major areas around the island have been selected for this actual combat exercise and during this period, relevant ships and aircraft should not enter the relevant waters and airspaces,” state broadcaster CCTV reported.

Taiwan’s defence ministry, on the other hand, said it was closely watching the drills and that the island was prepared for conflict, but would not seek it. “The Ministry of National Defence stresses that it will uphold the principle of preparing for war without seeking war, and with an attitude of not escalating conflict and causing disputes,” it said in a statement.

On Wednesday, as Pelosi left Taiwan, China demonstrated its outrage over her visit with a burst of military activity in surrounding waters, summoning the US ambassador in Beijing and halting several agricultural imports from Taiwan.

Meanwhile, Taiwan scrambled jets on Wednesday to warn away 27 Chinese aircraft in its air defence zone, the island’s defence ministry said, adding that 22 of them crossed the median line separating the island from China.

In the latest uptick in tensions across the sensitive Taiwan Strait, Taiwan said it dispatched aircraft and deployed missile systems to “monitor” the Chinese activities into its air defence identification zone, or ADIZ. It also said it fired flares to drive away suspected drones near Kinmen. Taiwan’s military increased its alertness level. Its defence ministry said China was attempting to threaten key ports and cities with drills in the surrounding waters.

By flying to Taiwan, an island that China claims as its own, Pelosi became the highest-ranking elected US official to visit the self-ruled island in over 25 years. In retaliation, at least 21 Chinese military aircraft entered Taiwan’s air defence zone. On Wednesday, Pelosi said her presence made it “unequivocally clear” that the United States would “not abandon” a democratic ally like Taiwan.

China, showing anger, said that the presence of a senior figure from the US here would indicate a kind of American support for Taiwan’s independence. The other reason behind China being angry is that during a phone call with Biden last week, President Xi had warned that it was “playing with fire”. Despite this, Pelosi landed there, ignoring the threats.

However, the Biden administration has said that the United States remains committed to its “one-China policy.”

Also, Foreign ministers of the G7 – Canada, France, Germany, Italy, Japan, Britain and the United States, as well as the European Union in a statement urged China to resolve the Taiwan matter peacefully and expressed concern over China’s “threatening actions,” particularly live-fire exercises and “economic coercion.” They added that it is “normal and routine” for legislators to travel internationally.